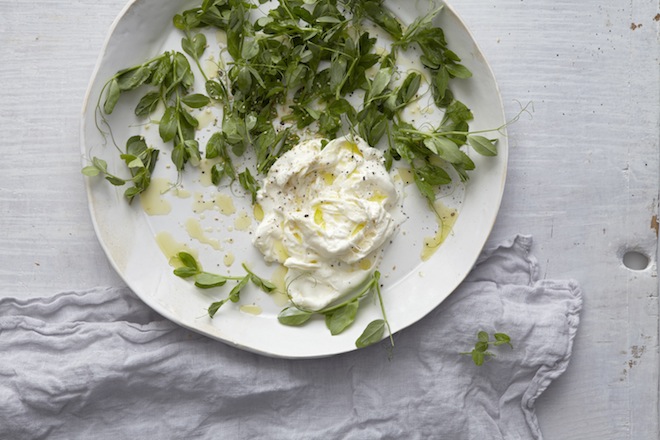 Photograph courtesy of The Cheesemonger's Seasons

Well before there was a Joan’s on Third, there was Joan’s: a family-run catering business that Joan McNamara, a chef instructor from New York, started out of a kitchen on West 3rd Street. Around 16 years ago Chester Hastings, a chef out of San Francisco, came down to work at Joan’s. Together, the two chefs grew the business—and the family. Hastings eventually married McNamara’s daughter Susie. He also helped open Joan’s on Third—the restaurant and retail store—and was the force behind the shop’s gloriously stinky cheese counter. Walk into Joan’s on Third today, and the first thing you’ll see is dozens and dozens of different types of cheeses from all over the U.S. and Europe. It was Hastings’s love for cheese that led him to write his first book, and, out this month, his second: The Cheesemonger’s Seasons: Recipes for Enjoying Cheeses with Ripe Fruits and Vegetables. “It’s getting better, but people are still afraid of cheese,” says Chester Hastings, reached by phone. “I started the cheese program at Joan’s because I wanted to be able to push pieces of cheese into people’s mouths and get them to taste it—even if it was unfamiliar, even if it had a strange name. There’s an accessibility problem with good cheese in this country, just like there is with good wine or fine foods, there’s a snobbery about it where people think if they don’t know everything about it they don’t know anything and then they stay away from it.” Hastings hopes that his books on cheese will make the subject seem less foreign.

“At the end of the day it’s an agricultural product as much as a food product. It comes from farms. There are cheeses we can get year round, and there are seasons for cheeses too, and they pair so beautifully with fruits and vegetables harvested in the same month,” says Hastings about his newest book. It’s filled with recipes like grilled baby lamb chops with feta; fresh goat cheese with fried garlic chips; and crostini with fava bean puree, fresh pecorino, crispy shallot, and pistachios. But to Hastings’s point, there might be nothing less complex than good cheese and fresh produce, as he outlines in the recipe below.

When I was visiting Princess Marina Collona many years ago in Rome, she was in the process of developing a line of citrus-infused olive oils, and tasked my mentor, Carlo, and me with developing a few recipes featuring these exotic creations.

“Infused” is not really the right word here, however, as these oils are made by crushing whole citrus fruits (peels, seeds, and all) with the olives at the time of pressing, to create a blend of oil so deeply permeated with fruit it will blow your mind. Agrumato, in Abruzzo, is another producer who uses the same technique to create a variety of oils that are outstanding for drizzling raw over grilled vegetables, fish, chicken, and salad greens.

If you can’t get your hands on a lemon olive oil for this recipe, use a good fruity extra-virgin olive oil and add freshly squeezed lemon juice to taste. There should be a nice balance of acidity to fat.

Toast the sesame seeds in a small, dry skillet over medium heat for about 1 minute, until just barely turning golden, taking care not to burn them. Remove from the heat and immediately pour the seeds into a small bowl. Let cool completely. Trim any tough lower leaves from the shoots, then rinse and dry well.

Cut the Burrata into four equal pieces and lay them, cut-sides up, on a serving platter or four individual plates.

Divide the pea shoots evenly around the Burrata pieces. Drizzle the olive oil over the pea shoots and Burrata and scatter the sesame seeds over the top. Season with salt and pepper. Serve immediately.