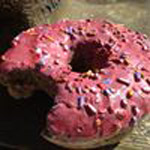 Not long after I moved here for college I read a surprising statistic: Los Angeles has the highest per capita number of donut shops of any major metropolitan city the United States. (Phoenix, by the way, has the lowest.) Having always loved doughnuts, I decided it would be my mission to eat at every one of them and rate them in an exhaustive guide (in the days before blogs, this would have been a zine). The intervening years have taught me plenty.

Operating mainly on gut instinct I’ve made it a point to consume doughnuts wherever and whenever possible, whether that’s an $18 trio of gourmet hand-fried puffs in a tony West Hollywood restaurant or a $1 cinammon crumb donut eaten at 4 a.m. outside the women’s jail in Van Nuys.

I never had the time — or the budget — to complete my mission, but I’m hoping there’s still time.