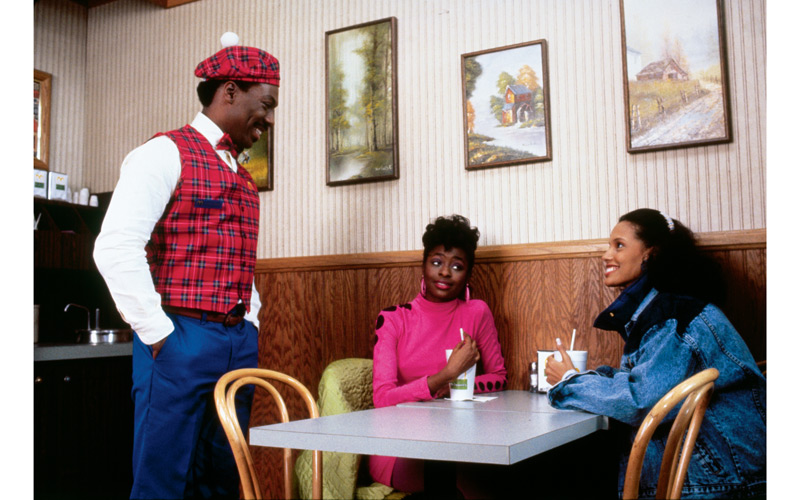 UPDATE (October 25, 2018): For 2018–the 30th anniversary year of Coming to America’s release–Fat Sal’s will be bringing back this popular pop-up. This year, it runs October 28 to 31 at the sandwich chain’s Hollywood location, and in addition to the food items described below, you’ll be able to walk into a pop-up MY-T-Sharp Barber Shop, also from the film, to sit in a barber chair or snap a photo. If you want to try the special dishes without braving long lines, Postmates has announced they will be the pop-up’s exclusive delivery partner. See below for our coverage of the 2017 edition of the event.

Fat Sal’s in Hollywood (1300 North Highland Ave.) is getting a Halloween makeover as McDowell’s, the fast food joint featured in the underrated 1988 Eddie Murphy comedy Coming to America.

In the movie, Murphy plays the prince of Zamunda, a fictional African country, who resists his parents’ attempts to arrange his marriage. He sets off for America, accompanied by his servant Semme (Arsenio Hall) in search of a woman who will arouse his intellect as well as his loins. In an attempt to hide his regal stature, he takes a job at McDowell’s. The restaurant is owned by Cleo McDowell, who explains to Prince Akeem, “Me and the McDonald’s people, we’ve got this little misunderstanding. See, they’re ‘McDonald’s.’ I’m ‘McDowell’s.’ They got the golden arches. Mine is the golden arcs. They got the Big Mac. I got the Big Mick. We both got two all-beef patties, special sauce, lettuce, cheese, pickles, and onions, but they use a sesame seed bun. My buns have no seeds.”

Fat Sal’s temporary transformation will affect the interior and exterior of the restaurant, as well as the menu. Fat Sal’s version of the Big Mick features cheeseburgers, lettuce, tomato, onion, pickles, fries, and fat sauce on a hero.

And of course there will be an over-the-top beverage called the Sexual Chocolate Shake, which includes chocolate ice cream, chocolate syrup, cherries, an entire slice of chocolate cake, shaved chocolate, and chocolate sprinkles. (If it’s been a while since you’ve seen the movie, Sexual Chocolate is the name of Randy Watson’s band at the Black Awareness Rally where Prince Akeem first spots Lisa.)

If the real-life McDowell’s feels like a random throwback to a 29-year-old movie, please direct your attention to this recent Hollywood Reporter piece that suggests Coming to America may finally be getting a sequel.

Re-Up Your Gym Membership. The New Fat Sal’s in Encino Is Opening Soon