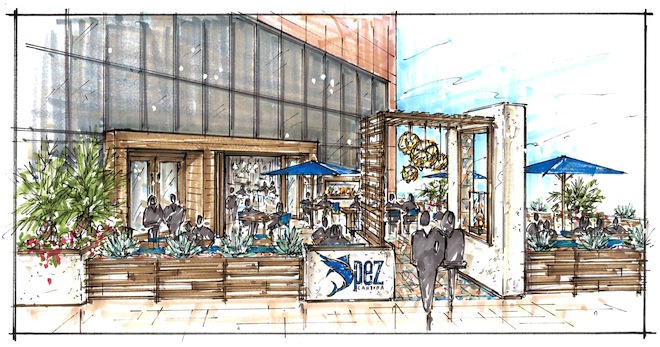 There’s something official about downtown Los Angeles’s revival now that GQ magazine has named it American’s Next Great City. In addition to all of the changes at Grand Central Market, the restaurants opening next week inside the new Ace Hotel, and everything that’s been popping up in the Arts District, Bunker Hill is getting a new seafood-focused Mexican restaurant called Pez Cantina.

“Bret and I go down to Loreto, Mexico, in Baja, several times a year to fish and dive. We’re basically mermen,” says Ramirez. The brothers-in-law connected over their love of food and fish and are bringing the two together at Pez. “We love the freshness of eating scallops we’ve just caught, right on the boat, so we want to translate that experience into a more refined atmosphere downtown,” explained Thompson, who most recently worked at downtown’s Market Restaurant & Catering.

Pez Cantina will have a full bar and serve lunch and dinner when it opens on or around June 1.