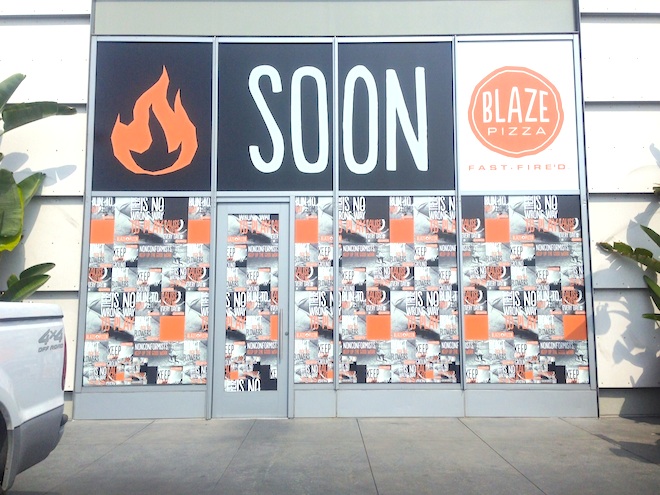 Beverly Grove: Blaze Pizza, the build-your-own pizza concept created by Olio Pizzeria founder Bradford Kent, is opening a new location at The Original Farmers Market. Just in front of CBS Studios on the market’s North side, Blaze has taken over the space that housed salad chain Freshii. Farmers’ Market staff say Blaze should open in about a month. » 110 S. Fairfax Ave. Ste A14, Beverly Grove.

Koreatown: The Hotel Normandie has undergone some major renovations and is now  adding dining options to the property. That’s where chef Gary Menes comes in: he recently told the Times that Le Comptoir will take over a 527-square-foot space at the hotel early next year. From a counter, he will serve up to eight patrons at a time. The menu—vegetable focused, with the option of adding meat—will remain in the same vein. » 605 S. Normandie Ave., Koreatown, lecomptoirla.com.

Hollywood: The Cardiff Giant Group (headed up by Beau Laughlin, who is also soon opening a restaurant in the Arts District called Fifty Seven), launches a nightlife venture. DBA has taken over the former Voyeur space on Santa Monic Boulevard. A DJ, drinks, and dancing will dwarf any food offerings when DBA opens in November. On the nights when it’s dark—and during the day—DBA will serve as a space for artists and performers. » 7969 Santa Monica Blvd., West Hollywood, dbahollywood.com.

Beverly Hills: A new coffee shop arrives on North Beverly Drive in downtown Beverly Hills later this month thanks to Nespresso, the makers of those itty bitty espresso machines. In addition to a retail component, the shop will sell a wide variety of espresso drinks using their patented machines. » 320 N. Beverly Dr., Beverly Hills.