Home Uncategorized Comfort Yourself With Meatloaf 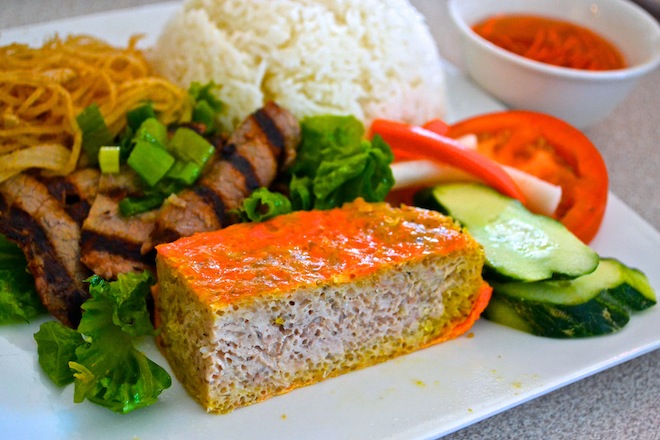 Vietnamese meatloaf is not a Southeast Asian tubby ‘70s era rockstar with a fascination for bats coming from hell. This might be hard to believe, but it’s actually a homey, comfort food that’s simple and satisfying and not too much unlike American meatloaf.

Finely ground pork is seasoned—and here’s where it gets Asian-y—folded in with vermicelli noodles, and then molded in a casserole dish or deep rectangular pan and steamed until almost cooked. Then, whisked egg yolk is poured over the pork, which is then steamed until it’s fully done. Nuoc cham or Vietnamese dipping sauce consisting of sweet chili sauce, fish sauce, vinegar, julienned daikon, and carrots tie the dish together with traditional flavors.

Pho 999 in Van Nuys is one of the most acclaimed Vietnamese restaurants in the San Fernando Valley. They include in their rendition of Vietnamese meatloaf several other flavorful delights: sweet and smoky charbroiled beef slices and a pile of bi—thin strands of translucent boiled pig skin resembling vermicelli and pieces of pork that are then dusted with bot thinh, or roasted rice powder.

The meatloaf itself has a satisfyingly sponge-like texture. Although much more dainty than your standard hearty American meatloaf, the Vietnamese version still eats like a dish mom could’ve made.