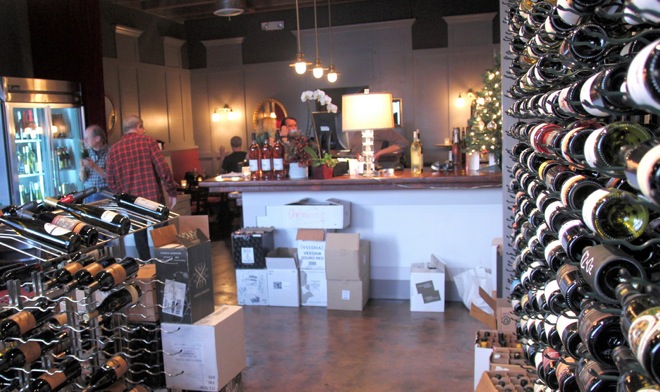 Those familiar with the seven-year-old Colorado Wine Company store in Eagle Rock will wonder briefly when they first visit the new digs—located a quarter-mile up the street from the old location—if it is under the same ownership.

Indeed it is, but the new venue’s look is very different. It’s more bar than store, unlike the previous location, which had a wine tasting room way in the back, at the end of a long, skinny hallway. The new space features many more places to sit and enjoy your wine, with bench seating along the wall, stools around the wraparound bar, and additional seating at the front of the store. The color scheme—well, they actually have one this time—marries dark colors with a decor that’s classic rather than minimalist modern. Although the space is a touch smaller than the former 2114 Colorado Blvd. locale (1,000 sq. ft. versus 1,200), the 25-foot-high barrel-vaulted ceilings make it feel quite a bit larger.

The good news for beer fans who are already acquainted with sister store, Sunset Beer Company, is that the new bar is equipped with beer taps. No beer flights available yet, but owner Jennifer Nugent said they’re coming.

As for what’s to become of the store’s popular White Trash Tastings, which pair wine with “white trash” cuisine, Nugent said that they might do a huge blowout and collaborate with their neighbor, Center for the Arts Eagle Rock, to revisit the series next year. “It’s getting bigger and bigger every year and I want to reward that,” she said.

The owners were forced to move their store when the rent tripled to Santa Monica’s Third Street Promenade prices, according to Nugent. The landlord of their Echo Park beer store told them of this new space, which looks promising even if it only has street parking.

The new Colorado Wine Company location had a soft opening on October 31, but it will celebrate its official grand re-opening this Saturday. Attendees will be treated to drink specials like $5 wine by the glass and draft beer all day, as well as a hibiscus champagne cocktail. The beers on tap will be Port Brewing Mongo IPA, Oskar Blues’ Old Chub Scotch Ale, Great Divide’s Yeti Imperial Stout, Avery Brewing’s White Rascal, and Eagle Rock Brewery’s Populist IPA. For nosh, there will be a cheese buffet and food trucks Sweet Arleen’s Dessert Truck and The Grilled Cheese Truck will roll in at 7:30 p.m. The Grilled Cheese Truck will feature a special melt for the occasion: a habanero grilled jack cheese with homemade chili, Fritos, fire-roasted salsa, cilantro, and sour cream.