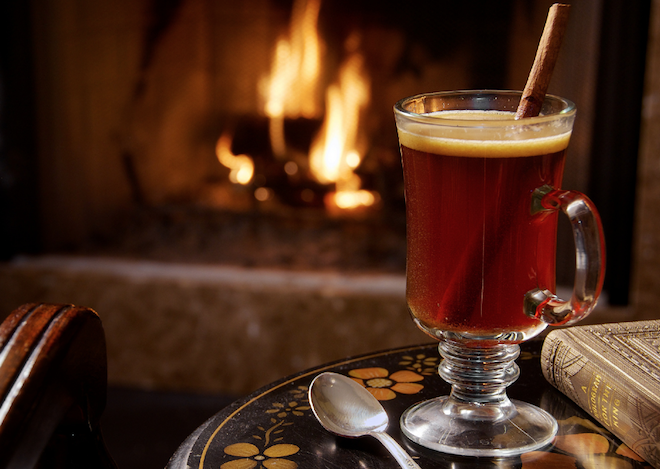 In the 1947 holiday film Miracle on 34th Street, an inebriated Santa impersonator explains his perceptible buzz to a disapproving Kris Kringle: “A man’s gotta do something to keep warm.” The weather along our own Miracle Mile rarely dips below the high 40s, but the desire to cozy up with a drink that warms you with more than its temperature is no less strong.

While much of the current mixology renaissance has focused on oversize ice cubes, some local bartenders are reviving these steamy libations, tapping into a history that’s stiffer than a martini. “Hot drinks such as possets, toddies, and nogs predate the cocktail,” says Marcos Tello, co-owner of Tello Demarest Liquid Assets, an L.A. bar consulting company. “They go back to the days of inns and taverns.”

“Hot drinks were popular in the early days, when ice was scarce, because sugar dissolves better in boiling water,” says Josh Goldman. As bar director at Circa in Man-hat-tan Beach, he heats horchata, a Mexican rice drink that’s usually iced. “I wanted to offer something for those marine layer-blanketed nights,” says Goldman. Made with Marcona almond milk, brown rice milk, and condensed milk with cinnamon, the hot horchata is spiked with mescal and anejo tequila.

Naomi Schimek of Hollywood’s the Spare Room had jet-setting snow bunnies in mind when she created the Deep and Light. “This is the most popular après-ski drink in the French Alps, where it’s known as ‘Green Chaud,’” she says. Schimek mixes green Chartreuse with hot chocolate, which she tops with chestnut whipped cream and a dusting of dehydrated Chartreuse.

Chilled Sunset Strip crawlers can take shelter at Eveleigh with the off-menu Hot Buttered Chartreuse. Why Chartreuse instead of rum?  “It’s like a roller coaster in your mouth,” says bartender David Kupchinsky. “It has 115 ingredients, so it takes you through many different flavors.” Or if your taste in cold-weather bevs runs more classic, Eveleigh offers a traditional hot buttered rum and a “tealess” hot toddy.