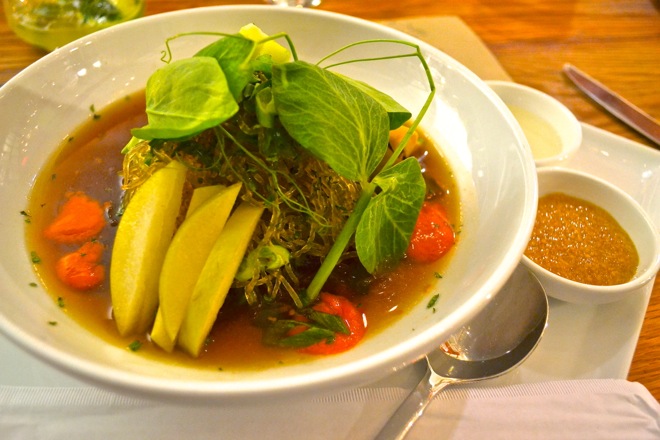 Ever notice that special dish or two on your favorite non-Asian restaurant’s menu that you can’t quite order at a straight-ahead, traditional Asian joint? “Asian Persuasion” is a once-in-a-while segment highlighting those chefs and restaurants that don’t specialize in Asian cuisine but occasionally dabble in cooking influenced by Far Eastern foods. But please don’t say fusion. Oh, no. Instead, let’s call it an Asian Persuasion. Doesn’t that sit better on the palate? Plus it rhymes.

Cold noodles don’t exactly evoke scream “comfort food!” to most American bellies, but for any Korean person who was raised slurping the stuff without coming up for air until the entire bowl was emptied, these frigid, starchy strands called naengmyeon are just as soothing and nostalgic as piping hot mac n’ cheese or chicken noodle soup might be to others.

The noodles, typically made from buckwheat or sweet potatoes, are traditionally served in an icy cold, tangy broth made from beef broth or a winter kimchi brine, often with cold slices of boiled beef, Korean pear, and cucumber. But at Matthew Kenney’s M.A.K.E., the dish is overhauled and given a raw, vegan spin that’s downright delicious and refreshing.

Lcated on the top floor of Santa Monica Place, M.A.K.E. is a raw and living foods restaurant “featuring cutting edge, plant-based cuisine” that is never heated beyond 118 degrees Fahrenheit. Their take on naengmyeon intrigued me, not just because they’d take out the meat, but also because their noodles are made from kelp, which doesn’t need to be cooked as a regular noodle would, thus making it a perfect substitution at this raw restaurant.

To help transform the kelp into “kelp naengmyeon”, the nutrient dense sea plant marinates for a few hours in sesame oil, agave, tamari, and lemon juice before being shredded to resemble cellophane noodles. Shiitake and porcini mushrooms, kombu (a form of seaweed often used in miso soup), kimchi juice, and tamari are used to create the rich broth. Trumpet royale mushrooms, sweet Asian pear slices, cucumber, and pea vines are also added in, and the whole dish is served alongside traditional hot mustard and vinegar. The flavors of sweet and sour, spicy and pungent, all coalesce to make a mean bowl of naengmyeon, with the noodles exhibiting a firm and fun crunch that only kelp can produce. Another “Asian Persuasion” item found on M.A.K.E.’s menu is their raw kimchi dumpling. The dumpling wrappers—fabricated from spinach juice and pureed coconut meat—dehydrate at a low heat for eight to 10 hours, developing a pleasantly earthy flavor and the texture of a fruit roll-up. The dried, green square wrappers are then filled with a kind of roughly creamed cashew and kimchi mixture that lends a gratifying, “meaty” feel and savory, nutty taste to every bite. A spicy kimchi and purple cabbage sauce is drizzled around the dark green packets, tying it all together into what I found to be a thoroughly enjoyable and surprising Korean-inspired culinary experience.