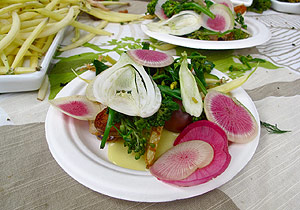 The inaugural L.A. Loves Alex’s Lemonade Stand  event was a delicious success. Foodies and supporters of Alex’s Lemonade Stand—which raises money to fight childhood cancer—gathered in front of the stately mansion at Culver Studios on a gorgeous fall Sunday to sample the creations of a “dream team” of chefs. There was lemonade aplenty, including some lemonade-inspired cocktails from the team over at Hungry Cat. Smoke billowed from the grill tops manned by Neal Fraser with his “whole hog in a box” and Judy Rodgers with a juicy hamburger on rosemary focaccia and homemade pickles.

But it was the desserts that really stole the show. Our favorite was the impressive spread of sweets from Tavern. (We may have taken more than one of the salted caramel macarons.) Moving speeches from Suzanne Goin (Tavern, Lucques), her husband David Lentz (Hungry Cat), and the parents of Alex Scott—the inspiration behind the charity—warmed up the crowd, who then enthusiastically participated in the live auction that followed, featuring an underground food tour of L.A. with Jonathan Gold and a day in the kitchen at Chez Panisse. (We, sadly, won neither).

Pics of the savory spread from top-to-bottom:

1) Oysters and shrimp from Hungry Cat.

2) “Ham in Hay” from Paul Kahan of Blackbird, Avec, and the Publican.