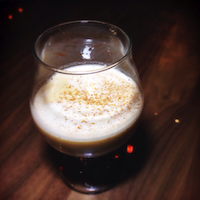 It’s a rare feat when a bar’s cocktail menu appeals to both light drinkers and seasoned imbibers. Sometimes their straightforward tipples are too simple, or the ingredients used to make things interesting are just too obscure. But at the new City Tavern Downtown, which opened yesterday in the Figat7th complex, head bartenders Brent Falco and Cari Hah have danced back and over the line between direct and daring and everybody wins.

How did they do it? By delving even deeper into the needs of drinkers with these three simple components.

1. A thoughtful cocktail list: “We wanted to look at the menu in a different way and say, ‘Maybe we don’t put mezcal first to scare people, but maybe we name them and put what’s really fun about that name,” said Brent. Thanks to this little trick, during one of the Friends & Family nights last week, the Pineapple Express cocktail, which is made with pineapple-infused mezcal, ended up being very popular with the ladies. “And they were ordering it because ‘pineapple’ was the first thing that they read. We did that with bourbon, too, and we did that with Rumble Thyme. The first ingredient says ‘thyme-infused syrup’ and then they’re reading ‘bourbon.’ So we had a lot of women that were drinking bourbon.”

2. Happy hour-only specialty drinks: Self-conscious cheapskates will no longer feel second-rate thanks to happy hour cocktails ($5 to $6) that are only available during (you guessed it) happy hour. Work overtime and you miss out on “Pooh’s Favorite Drink” of lavender-infused honey syrup, lemon juice, and gin.

3. Miniaturized cocktails: The mini ‘tinis are basically like a beer or wine flight but with martinis (Gibson, Dirty Martini, barrel-aged Vesper) and Manhattans. The idea stemmed from a need for practicality as well as variety. “For a long time Cari and I have been talking about mini drinks because we couldn’t drink a whole big drink. We thought, ‘Wouldn’t that be great if we could do flights like people do with beers but you can actually have a Manhattan three different ways?’ So you’re experiencing what that vermouth can do with that rye and those bitters.” The City Tavern drink program, which differs from the Culver City’s more beer-focused one, is all about fun. “We wanted to bring the fun back to cocktails because for a moment we all started getting so serious. So if you look at our menu it’s just fun names, fun ingredients giving you that fun experience at a casual but well-done bar,” said Brent.

After a couple of months when the restaurant gets its bearings, they will bring in a boozy slushie machine as well as feature late night hours when nightlifers can come in for just cocktails and small bites in the front lounge. It’s also in the front lounge where they’ll showcase guest bartenders and host special brand and spirit nights.

Ballers who want to keep a bottle of their own high-end booze at the bar will have the opportunity to purchase a locker. This invite is also extended to brands. “Like Pernod Ricard or Bacardi might buy a locker,” said Brent. “We’re looking at holding two weeks with one brand and holding two weeks with another. Then we’ll do specialty mini martinis, carbonated cocktails, bottled cocktails, punches, maybe it’s a week of tasting different vermouths and how vermouths work.”