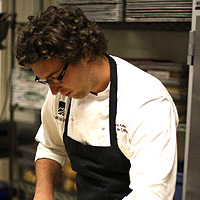 Another week, another chef taking the helm  at one of L.A.’s top restaurants. This time, it’s at Malibu’s hunting lodge-chic temple to carnivorousness, Saddle Peak Lodge. We sort of had a soft spot for Adam Horton, the previous chef at the tucked away spot. (Well, it was more like a soft spot for his venison.)  So we’re happy to hear that new executive chef Christopher Kufek has been working under Horton as the restaurant’s chef de cuisine for the past few years. This is the second spot in two weeks to promote a grunt from the inside (Water Grill’s Amanda Baumgarten was the restaurant’s sous chef), and it’s a trend we hope continues. Fresh blood is great, but rewarding hard work is better. Kufek, who according to a release “is also a skilled carpenter and cabinet maker” and “in his spare time he’s often spotted on the golf course,” takes over as Executive Chef starting today.

And there is this one other thing: We heard Horton left Saddle Peak to revamp the menu at Studio City’s Raphael with his childhood buddy, but the press release claims Horton left to do some culinary soul searching through Southeast Asia. Interesting… Maybe both?

Update: Yep, it’s both. Adam let us know via twitter that he’ll be in Southeast Asia for about a month and then starting at Raphael in March, with his new menu ready for debut in April. Cheers!