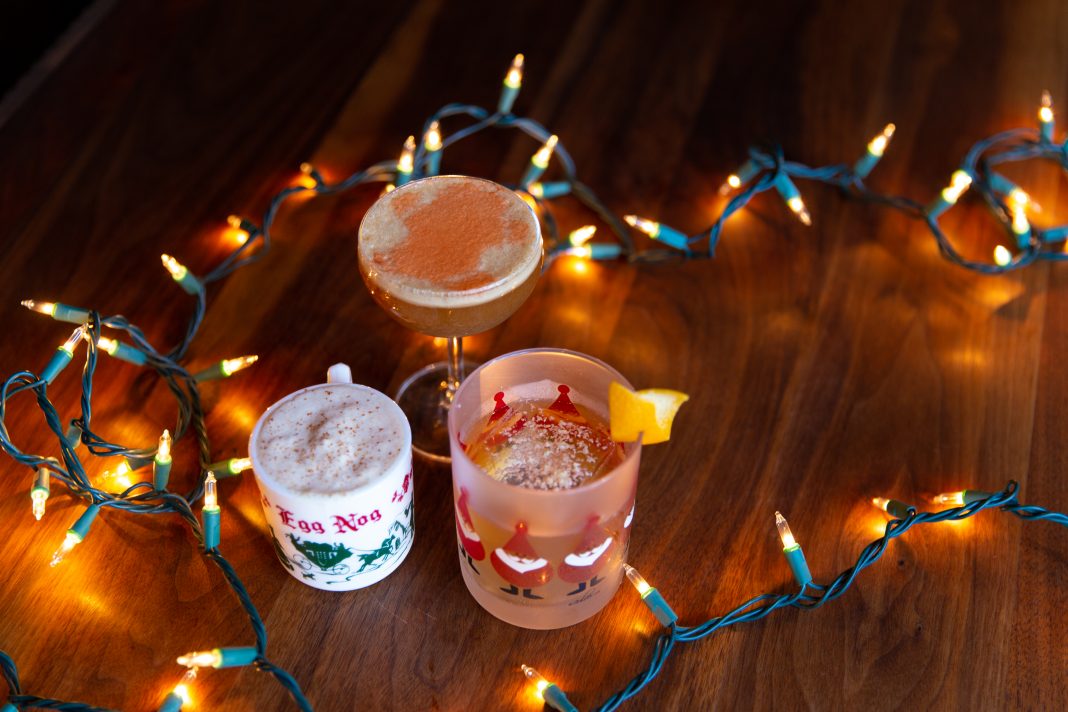 Once upon a time, going out for a festive drink at Christmastime might have meant heading to the Tam O’Shanter for an Irish coffee amid heaps of nostalgic decor. Then came the fancy holiday-themed cocktail pop-ups with their artisan drinks and Instagram-bait offerings. This year, the trend seems to be as strong as ever; L.A. has at least five holiday cocktail pop-ups going. And, while they all have their charms and are worth seeking out, we know that much eggnog could stir up even the sturdiest stomach. If you’re looking to hit just one, Blitzen at Here & Now in the Arts District earns our gold star.

A successful Christmas bar needs to be, to borrow from Hooters’ immortal slogan, “delightfully tacky.” While we might love our bar to be sleek and chic 11 months of the year, if you’re going to do a holiday theme, you need to go all out and make it a true whimsical winter wonderland. Blitzen gets this. Every surface has some kind of glittery, fantastic decor, the staff is outfitted in cheesy holiday sweaters, drinks are served in an assortment of adorable glassware, and the menu takes the form of an elaborately illustrated Christmas storybook. It also helps that the space itself has deep green walls, and a long, thin interior that could double for a club car on the Polar Express. The entry is perfect also, with windows decorated to look frosty and a machine spewing flurries of fake snow as you approach the front door.

There must also be drinks, of course. Any Christmas bar is going to have an eggnog offering, and Blitzen’s is as good a take as any in Los Angeles this year. Created by one of the bar’s co-owners, Aaron Melendrez, the Oh Holy Nog, has cognac, Avua Cachaca, Becherovka, amontillado sherry, egg, and coconut cream for a rich but not cloying take on the classic. Other cocktail options include the Gingerbread Man, with rum, sherry, gingerbread syrup, lemon juice, allspice, and fig-cinnamon bitters, or the Me, My Elf, and I, which skews to the sweet side with white chocolate-infused vodka and pumpkin-caramel cordial, but comes served in a copper gnome that brings out every phone at the table.

Here & Now had a bit of a head start on the seasonal pop-up game. The bar, which opened in October, was previously known as Westbound before closing to retool and bring on some additional partners. Last year, Westbound delighted us with its version of what has become the template for Christmas pop-ups, Miracle.

Miracle, offered by the people behind bar supply shop Cocktail Kingdom, is a kind of pop-up kit that bars around the country can order if they want a Christmas overhaul. The kit includes cute cups, a slate of recipes, and basic guidelines for decorations, but the rest is up to individual establishments to customize. Bars that participate in Miracle also commit to donating a portion of proceeds to charity. This year, Here & Now didn’t participate in the official Miracle program, opting to develop all its festive recipes in-house. It did, however, keep the charity angle, partnering with PATH and conducting a drive for toiletries and personal goods for the homeless.

Ever Bar in Hollywood took up the mantle of being L.A.’s official Miracle location for 2018. Intrepid revelers who want to drink in the festive cheer can also find full Christmas bar pop-ups at NoMad Hotel, No More Heroes Cocktail Bar, the Walker Inn, and the J.W. Marriott Hotel at L.A. Live.

RELATED: That Precious Pop-Up Christmas Bar Is Back in the Arts District