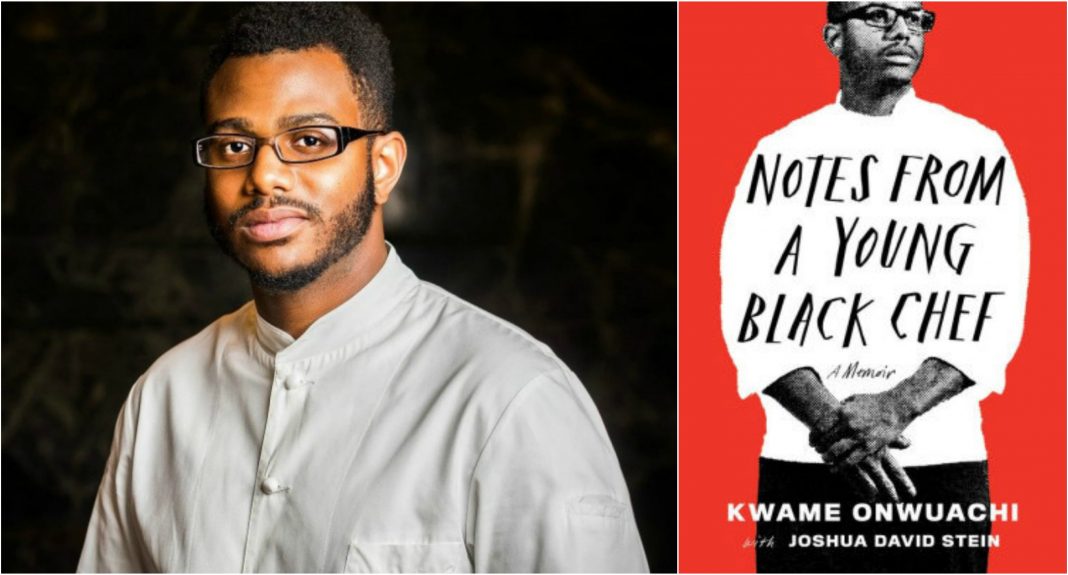 Washington D.C.-based chef Kwame Onwauchi’s new memoir, Notes From a Young Black Chef, details his rise in the world of fine dining–including recalling insensitive and inappropriate comments he endured while working in elite kitchens. Among the incidents he recounts were his run-ins with chef Chris Flint, most recently of NoMad Los Angeles, when Onwauchi was working for Flint at Eleven Madison Park.

In one incident, Onwauchi suggested it was inappropriate to refer to a food mill as a “mouli” when speaking publicly to guests in the high-end New York City dining room. The word is seen as offensive by some due to its use as a slur against people with dark skin, derived from the Italian word for eggplant. Responding to the critique, Flint, who is white, reportedly stated that, “No Black people eat here anyway.”

“It’s like calling an abuser out. Is it the most comfortable thing in the world? No, it’s not. But hopefully things will change. I feel that it’s necessary.” Onwauchi told Washingtonian about naming Flint specifically in his book. “It’s not OK to make a subtle joke on race and then come in the next day and give someone a high-five, just like it’s not OK to grab someone’s butt and then come in the next day and say, ‘How’s your day this morning?’ None of that is OK. If you’re going to talk about it, I think it’s important to say these names.”

The incident stood out for Onwauchi, though his concerns about working with Flint seem to have extended beyond a single choice of words. He also alleges that Flint punched walls and may have stalled the younger chef’s career trajectory while others were promoted.

Flint relocated to California in 2018 to serve as the executive chef of the NoMad Los Angeles. On the current menu at NoMad Los Angeles, a dish is prominently listed featuring “Kaffir limes.” Not unlike “mouli,” the term “kaffir” is considered offensive and is used as a slur again specifically against Black people, particularly in South Africa. The same citrus fruits are often called Makrut limes, the original name given to them in Southeast Asia where they are grown.

Chef Flint did not respond to requests for comment, but a representative has stated that Flint voluntarily submitted his resignation to NoMad effective March 15, unrelated to the book’s publication, and is currently traveling in Asia. His role will be filled by his former chef de cuisine, Rudy Lopez.

Flint was available to address the allegations in Eater New York, calling the situation “devastating.”

“This is incredibly shocking and makes me really sad, because I’ve always tried to give the most of myself to these restaurants that I’ve worked with and tried to do the best for the team around me,” Flint told Eater. “It’s just hurtful that someone would think that it’s a race-related issue. I’m sorry if I ever made anyone feel like that.”

A spokesperson for Eleven Madison Park, the restaurant where the incidents took place and part of the Make It Nice group along with NoMad, also released a statement about the accusations: “We were aware that Mr. Flint could be tough at times but had not heard that his conduct could go beyond being a tough boss demanding excellence. His leadership style needed to change to treat everyone more respectfully and to operate the best kitchen possible. As the entire industry has been evolving for the better, so have we.”

Part of the evolution the industry is undertaking will require recognizing that supporting workplace diversity means calling out microaggressions and inappropriate language and behaviors.

“The most insidious kind of racism isn’t always being called the N-word. At least that’s shameless enough to get you fired.” Onwuachi writes. “It’s the unspoken shit, the hard-to-prove, hard-to-pin-down, can’t-go-viral, day-to-day shit.”

Onwuachi, who now helms the elegant Kith/Kin in Washington, D.C., had a different journey than many of his food-world contemporaries. He grew up in the Bronx, spent time in Nigeria and Louisiana, and ended up with his first professional cooking gig on board a ship that was part of the clean-up crew after the Deepwater Horizon oil spill. He attended the Culinary Institute of America, worked at Thomas Keller’s Per Se in addition to Eleven Madison Park, and was cast for season 13 of Top Chef, before, at the age of 27, opening his tasting-menu driven restaurant Shaw Bijou and, later, the more casual Kith/Kin.

RELATED: Michelin Will Rate L.A. Restaurants This Year–But Does Anybody Actually Want That?