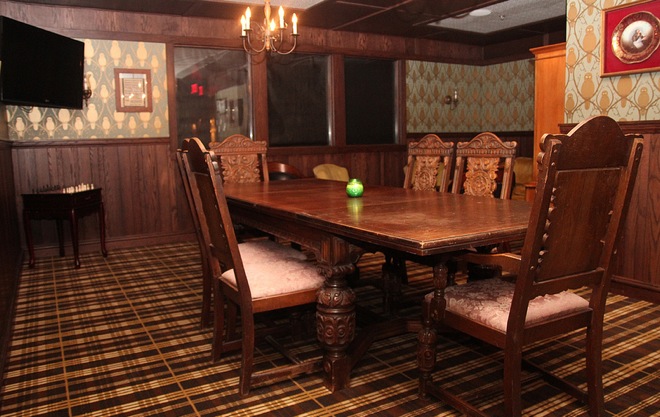 Walking into Chloe’s, the new bar in the Pub at Golden Road is like walking into an alternate universe. One moment you’re in the bright, airy, raucous Atwater Village beer hall and the next you’re in a quiet, dark-wooded English pub. The two-story venue located through a private entrance within the Pub is decked out with a fireplace, a drop-down 120-inch screen, a pool table, 12 Golden Road-dedicated taps and enough room for 200 beer fiends. But, before you get all excited about your future favorite brewpub, you have to be a member to get in. And to be invited to become one, you have to work in the beer industry.

That’s right. Chloe’s may look like a full service pub but it’s actually an event space reserved for beer industry nights or for private events, like the most awesome wedding reception ever or a beer geek’s dream birthday party. There are six different spaces available to accommodate different size groups, whether for a party of two in “The Nook,” a corner table above the bar, or 75 seated in “The Parlour” pub area. However, only members can book events for less than 10 people. And only members will get access to special Golden Road release tastings and events like the upcoming New Year’s Eve bash. There’s even talk of possible home brewing meet-ups and comedy nights. The food menu here is more formal and entree-driven than it is in the Pub, catering to a specific party’s needs, whether it be for a vegan banquet or a three-course dinner.

But Golden Road co-founder Meg Gill says Chloe’s isn’t meant to be an exclusive club but rather be inclusive of the beer community. What started out in concept as a barrel room tasting space for meetings turned into this communal pub to not only promote the craft beer community but the brewery itself. “The concept behind it had a lot to do with us starting the business and seeing a need to do something different,” said Gill. “Instead of having a team of sales reps who go out and try to sell our brand and sell our beer like a lot of the big, well-established breweries, we wanted to differentiate ourselves coming to market in a pretty late time for craft. There are big brands out there in the craft community and in the Bud, Miller, Coors community and we wanted to bring people into what we’re doing and to teach them about our brewing process and about the beers that we brew and about the community we’re trying to cultivate in L.A.”

In addition to an event space, Chloe’s will also be used for beer seminars. Every Wednesday, a different retailer will come in to learn about Golden Road’s brewing process which includes taking a tour of the brewery as well as tasting and learning about beers. Slater’s 50/50 recently brought in its entire staff to get schooled.

So is there hope for the Average Joe to get in on this club? “They have to work in the beer business. That’s our opening membership,” said Gill. But for the Pub at Golden Road regulars, there’s a ray of hope. “We’ve offered a lot of regulars membership.”