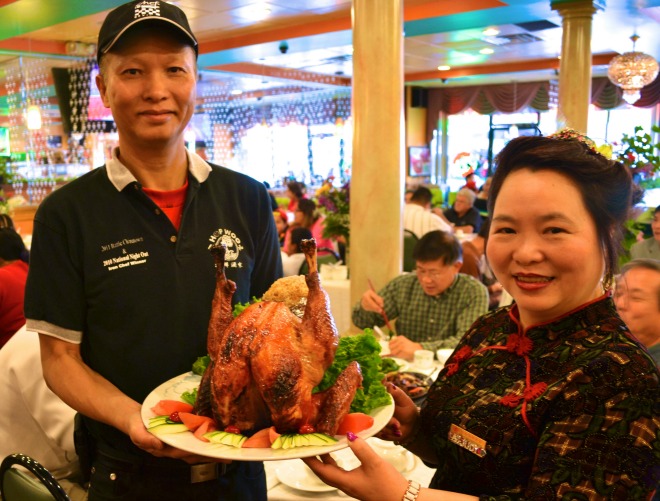 Thanksgiving is, without a doubt, a food lover’s holiday. Its unofficial logo, the cornucopia cascading forth with a fruitful bounty from the season’s harvest, was sort of the pre- all-you-can-eat buffet.

Since pilgrim times, our national day of feasting has evolved and adapted to include different dietary needs and varying cultural traditions. Today, you can celebrate Thanksgiving with a gluten-free, raw vegan, paleo turducken—assuming you had the wherewithal. And, did you know you could chow down in Chinatown on a Chinese Thanksgiving turkey?

Didn’t get an invite to a Chinese household on Thanksgiving? Fortunately, that’s not the only place you can sample a taste of a Chinese-style “fire chicken” (the colorful Chinese name for turkey). Chinese turkey is a well-kept secret—perhaps a little too well-kept. It’s roasted like a traditional Thanksgiving turkey but seasoned and basted with Chinese ingredients.

Chef Lupe Liang, who immigrated to the U.S. over three decades ago, looks forward to Thanksgiving every year as it is the one time of year he can expand his menu to embrace his adopted country and include the all-American turkey. Along with the fire chicken, he servies all the fixings—from garlic fried rice to potato and turkey curry to moo shu turkey.

Other Chinatown restaurants will be cooking their own version of the Thanksgiving bird as well. So say thanks, and Happy Thanksgiving, everyone! Let the Chinese tryptophan kick in!