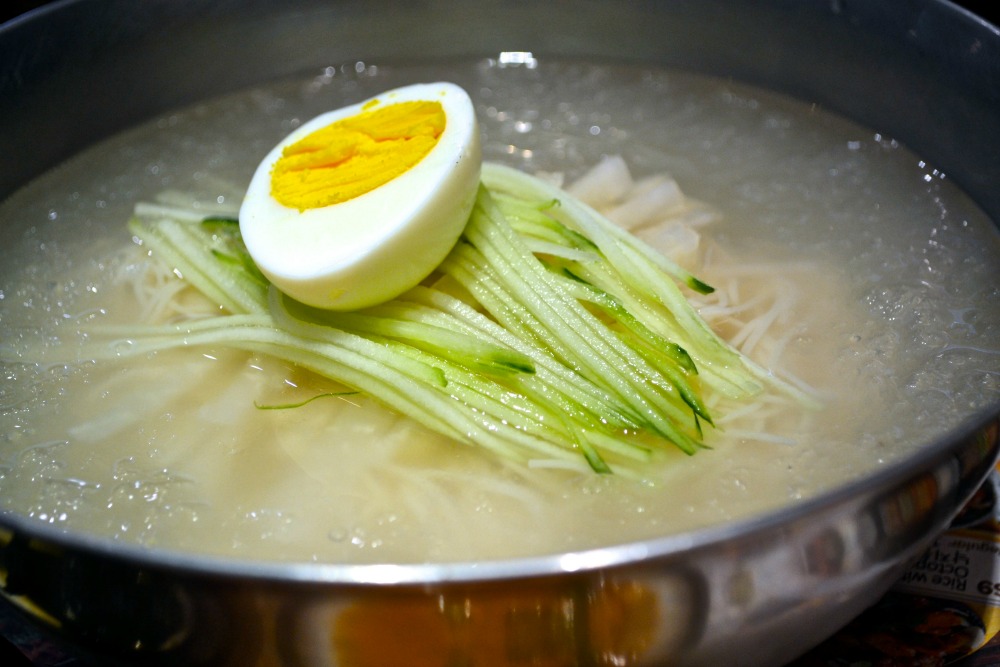 It is hot outside! And yet, you are craving noodles—ideally, the slurpy, soupy variety, but the problem is this sweltering, peak-summer heat. So how do you satisfy your soup noodle craving without succumbing to the high temps? Just chill out. A Korean chilled noodle soup called naengmyeonis the answer.

This is a much adored (especially during hot weather) Korean classic. Although its origins are debatable, it is known that buckwheat was introduced to Korea by the Mongols during the Goryeo Dynasty (918-1392 A.D.). Buckwheat is the main ingredient for mul naengmyeon, a popular version of the chilled noodle soup.

There are a couple of basic ways naengmyeon, or cold noodles, are served. One is Hamhung (North Korea’s second largest city) style, which uses a chewy noodle with a high potato starch content; it’s sweet and spicy after being with gochujang and sugar, and also known as bibim naengmyeon.

Pyongyang (North Korea’s capital city) is the name of the other variation. Pyongyang naengmyeon (or mul naengmyeon) has a base of beef or chicken broth along with the brine of cabbage or radish water kimchi known as dongchimi. Cucumber slices, Korean pear, and a hard-boiled egg are the bare bones accompaniments, topping off a mound of uncut, lengthy strands of buckwheat noodles. It’s always served in a frosty stainless-steel bowl for maximum chill.

One of the more interesting takes on mul naengmyeon ($10.95) can be found at O. Tofu House in Granada Hills. This bowl of broth is exceptionally pure with chicken and dongchimi flavors. The chilled broth floats with fine chips of ice. Julienned cucumber lay across slices of pear. Half of a hard-boiled egg punctuates the mound of noodles. However, O. Tofu House goes one step further and adds soy milk to the broth, giving the soup a sweet creaminess.

If you’re overheating on what you’re eating this summer, you need to go chill out with a bowl of Korean chilled noodle soup.

Three Years After the Aliso Canyon Gas Leak, People Are Still Reckoning with the Effects