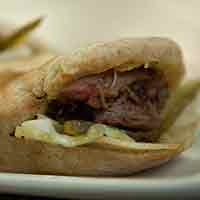 It’s officially fall! While we have mixed feelings about the demise of summer, we are excited about a few things that the new season brings: apple pie, hard squashes, braised meats, and the debut of Los Angeles magazine’s “Chefs of the Year” issue on newsstands! Each week online we’ll be highlighting recipes from some of our 20 award recipients. Chef Micah Wexler earned his Chef of the Year award for what he calls the “bubbe cuisine” at his La Cienega restaurant, Mezze. That includes house-cured pastrami, fluffy matzo balls, and this: slow-cooked brisket shawarma. The pita wrap recalls the best of late night street food, while the brisket—whether you have a Jewish grandma or not—tastes of home.