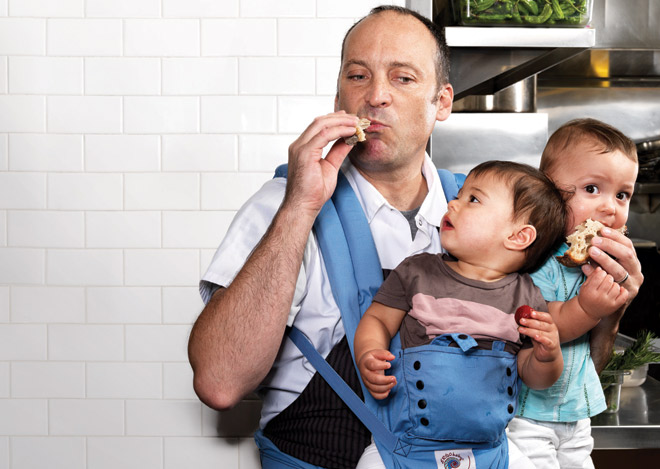 The reservation is all but impossible to get. A table set for one is within a spoon’s distance of the chef, who sets a custom creation before the diner, explains the proper eating technique, and nervously awaits the critique. The diner responds by sticking his fingers into the meal and declaring, No!

“If we give him fries and ketchup, he will dip the fry, lick off all the ketchup, and drop the fry,” says Vinny Dotolo, chef and co-owner of Animal and Son of a Gun. “Who does that? My two-year-old.”

We’re in the midst of a gastronomic baby boom. In the last few years a number of L.A.’s culinary talents have taken a moment between lunch and dinner service to have a child. Kids care as much about James Beard as they do about bedtime, but that doesn’t stop these chefs-cum-parents from trying to nurture a refined palate. How they approach such a task, like most aspects of parenting, is up for debate.

“The key is to hook them in when they’re really little,” says Suzanne Goin, the chef and co-owner of Tavern, A.O.C., and Lucques and mother of three. “They will eat what you give them because they don’t have options. Eventually they are going to eat.”

Walter Manzke (Petty Cash Taqueria) has a two-year-old son who, he swears, eats everything. “It’s about the best ingredients,” Manzke says. Dotolo’s business partner, Jon Shook—a new dad himself—agrees. “I didn’t see a farmers’ market until I was in my twenties,” he says. “My daughter went when she was a month old.”

Compromise is crucial, but there are some things a great chef won’t budge on. Sotto’s Steve Samson refused to feed his toddlers pasta until they had all their teeth: “I would have had to overcook it, and I can’t overcook pasta. No way.”

Samson has something in common with the Frenchman behind Trois Mec, Ludo Lefebvre: twins. Lefebvre’s two-year-olds are known to “chew the meat to get the juice and then spit it out.” Far from being offended, Lefebvre studies the way they interact with food. “They smell, taste, and touch. At Trois Mec the first course is meant to be eaten with your hands. That’s because of my kids. I learn a lot from them.”