Home Uncategorized Chefs, Champagne, and Us 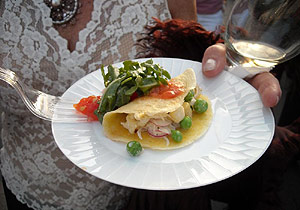 At the end of the night it was unclear whether the jazz band or Craft’s braised rabbit tortellini with morels was the highlight. But what was frightfully evident—even through the haze of four glasses of bubbly and a ginger cosmo (needless to say, we didn’t make the after party)—was that attendance at the first ever L.A. Chefs and Champagne event wasn’t quite what it should have been.

Last night, Melrose Place was taken over by the James Beard Foundation party that’s been a staple in the Hamptons for more than two decades. This year, they took a chance on the West Coast. The result? Well, mixed.

The low attendance should be blamed more on the ticket price ($275 for the general public) and late planning than our city’s lack of enthusiasm for food. Either way, we hope it doesn’t scare them off from trying us again next year. Because most everything else about the event (we sort of wished they’d chosen to make the guest of honor someone more local than NYC’s Tom Colicchio) felt right on.

Josiah Citrin and David Meyer in a "who sports cooler shades" contest. In the end, we think Josiah took it.

Getting a sneak peak of what’s to come from Octavio Becerra’s Palate opening downtown later this month. We’re suckers for a good cheese plate.