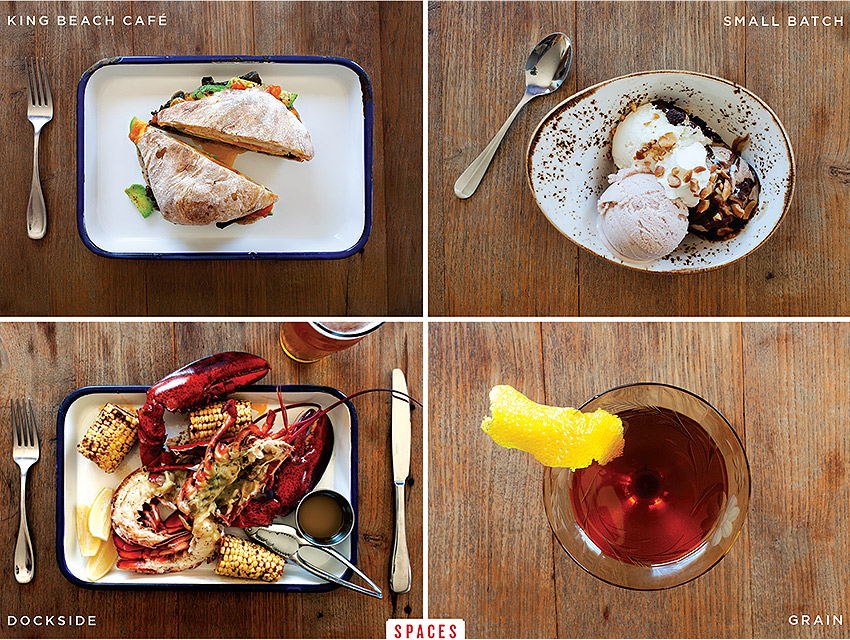 When Brooke Williamson opened Playa Provisions with her husband, Nick Roberts, earlier this year, she wanted her multipurpose restaurant to have something for everyone. “We hoped people would come for coffee in the morning at King Beach Café, have ice cream at Small Batch, go to Dockside for dinner, and finish with a drink at Grain,” Williamson says. “Those are the people who will keep us in business.”

Business was, we suspect, even more of a motivator for the pair to section off the 8,000-square-foot Playa del Rey building into four branded concepts, an often confounding but growing trend that is taking hold citywide as chefs try to find a way to make large restaurants financially viable. “With the sheer size of the space, we had to figure out something more creative,” Williamson says.

Eduardo Ruiz faced a similar challenge in Pasadena. “I thought the space was too huge, and I really didn’t want to take it on,” says the head chef behind the breakfast hub Kitchen, the sausage and beer hall Picnik, the ceviche counter Bar + Fish, and the cocktail bar Punch, all of which look out onto a single courtyard on Colorado Boulevard. “Split up, it becomes a culinary playground,” says Ruiz, who in addition runs the acclaimed Corazón y Miel in Bell. “But it also helps pay the rent.”

For local pastry star Sherry Yard, who is working with Father’s Office chef Sang Yoon to open a multifaceted food hall inside the historic Helms Bakery complex in Culver City, the expanse is an inspiration. “The original plan was to open just a bakery,” says Yard. “But it’s 10,000 square feet—how many cream puffs can people buy?” She and Yoon decided to focus on what the community lacked: a pizza oven, a gourmet deli, a rotisserie, a sit-down café. “I think of them as vignettes,” Yard says.

There are hurdles, however. For Williamson and Roberts, it’s storage in the single shared kitchen. For Ruiz, it’s the staggered hours: “Kitchen closes at 2—people see that and think the whole place is closed.” For us, it’s figuring out where we’re meeting our date. But Williamson believes the confusion will pass. “People are starting to embrace the format,” she says. “Yeah,” Roberts says, “it’s like a Disneyland for adults.”

The Best Bite from Every Chef at Cochon 555, L.A.’s Epic Heritage Pig Cook-Off