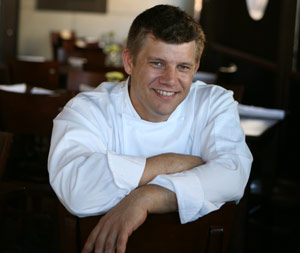 The James Beard Foundation tried its hand—somewhat unsuccessfully —at bringing their celebrated Chefs & Champagne tasting night and auction from the Hamptons to the West Coast back in April. Now its time for the New York edition, and among an enticing gathering of East Coast chefs are two California kids: Govind Armstrong of the temporarily shuttered Table 8 and Ben Ford of Ford’s Filling Station.

They seem somewhat odd picks for the only two chefs cooking west of Vegas—one of whom isn’t cooking here at all at the moment. Of course, much was made of the Foundation’s decision to choose New York’s Tom Colicchio as the honoree at the Los Angeles C&C event. This year’s New York honoree: Our own Wolfgang Puck. So, I guess we’re even….

If you happen to be in the Hamptons—and have $400 burning a hole in your stomach—the event takes place Saturday, July 26th at the Wölffer Estate Vineyard in Sagaponack, NY.