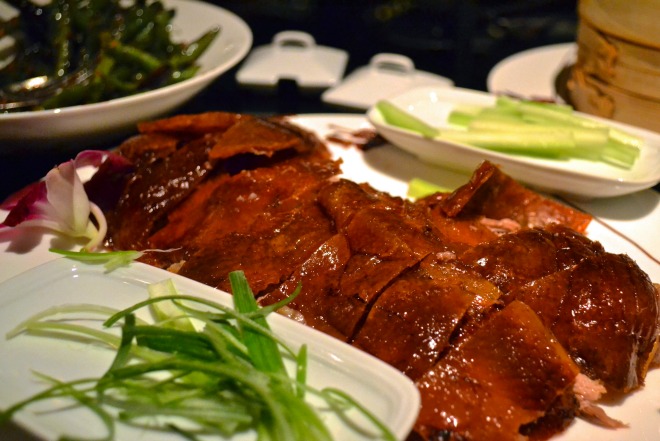 The New Year’s confetti has barely been swept away, and we are already seduced by another holiday. Well, not really a holiday, but it does involve food and it is a cause for celebration. It’s Peking Duck Day this Saturday! That’s what they tell me, at least. Beijing Duck Day would be more correct, but Peking duck is how most people know the lavish duck dish.

I’m still not clear on who created Peking Duck Day, and it definitely isn’t an occasion highlighted on the Chinese calendar, but I’m not complaining. Another reason to pig out on duck is fine by me.

The traditional process for preparing Peking duck is elaborate—normally requiring a full day. Chef Tyson Wong Ophaso at Chi Lin in West Hollywood takes no short cuts and painstakingly follows a time-honored procedure, which includes: blowing air into the duck to puff up its skin (thereby separating it from the fat), rinsing the duck with a maltose syrup mixture which gives the skin its signature crispness upon roasting, hanging and drying the bird for eight hours in a refrigerator kept at the right temperature and humidity, and, finally, roasting the duck in two stages (for a total cooking time of about an hour). The chef sources his American Peking duck from Long Island.

As per tradition, the duck is presented to guests before carving. During carving, the skin is removed from the meat. The Peking duck is served tableside. Here’s how you eat it: take one of the thin, small, wheat flour pancakes, made in-house, swirl it in plum sauce and combined with fresh spring onion and julienned cucumber, add in a few morsels of moist, tender meat along with a bit of the shatteringly crisp, golden-orange skin. It’s a sweet, savory, and succulent bite.

Peking duck has been prized since its inception during the Ming Dynasty and savored by emperors and common people alike. I suggest you stick with tradition and then lick your fingers afterwards.