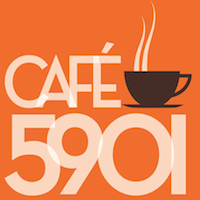 The other day, hungry and in need of a cup of coffee, I stumbled into the Olympic Medical Plaza on the corner of Olympic Boulevard and San Vicente. That’s where I first met Stephen Barkulis, the chef of this building’s Café 5901.

After watching the guy behind the counter brew coffee and make me a sandwich, I knew he wasn’t your average office building café cook. Barkulis is a classically trained fine dining chef. He got his start at La Vieille Maison in Florida, and later worked under David LeFevre at The Water Grill. In 2009 he was approached by Alon Raphael to open a fine dining restaurant in Studio City. At Raphael, Barkulis created dishes he’d only dreamed of, with access to ingredients like chanterelle mushrooms, Wagyu beef, and Scottish salmon.

Eventually, the long hours and demands of the restaurant took their toll. Barkulis says he was going weeks without seeing his wife and newborn. After he left Raphael at the end of 2010, he took some time off to spend with his family and refocus his priorities. When an opportunity to develop a menu for a small café arose, he took it.

Today, Barkulis has a routine. Most of his customers are regulars on their way to appointments, and the café’s set hours allow him to spend more time with his family. He gives back to the community by mentoring dozens of employees from Homeboy Industries, a nonprofit that helps ex-gang members and felons find work.

“Being able to really see them grow brings me a lot of joy,” he said, explaining that in his previous position he would look for specific skills on a resume, but now he asks himself: ‘How do I take a prep cook who has no experience and build him up and give him the necessary tools and confidence to do the job?’ Now Barkulis says, “I feel like this restaurant has really helped teach me what it really means to be a leader.”