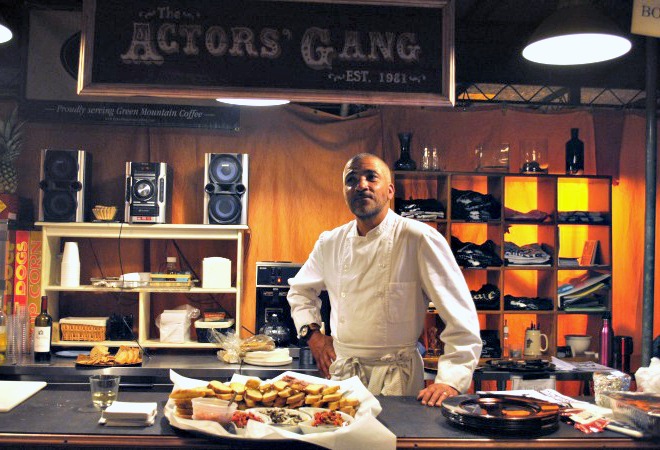 Count your lucky stars, L.A.: How many other cities have the quality of food trucks that we do here, where chefs with fine dining backgrounds take to the streets in their mobile operations so that we may enjoy kampachi blood orange crudo and Korean short rib tacos? Add Carb & Nation to that list, a craft sandwich and soda truck manned by chefs Fata Wijaya and Kevin Micheli, who have passed through top tier kitchens and most recently worked under Tony Esnault at the French bistro Church & State.

To tempt you even further, Carb & Nation will be teaming up with Doner Revolution founder/chef Farid Zadi (who taught Wijaya while he was at Le Cordon Bleu) for a one-night collaboration at Angel City Brewery, August 2nd, starting at 6 p.m. Here you’ll get a taste of Zadi’s French-Algerian roots and his current obsession, doner (the Turkish word for shawarma).

“I think quality doner was something missing in America,” said Zadi, who graduated from Ecole Hôtelier Auguste Escoffier. “There was never a version that reminded me of the kind I had in Europe, that balanced spices like cumin and coriander in just the right way.”

Zadi ups his game with homemade pita and saj breads, and butchers his own meat to use for the rotisserie spit. At Angel City Brewery he’ll offer a North African take on NYC-style halal chicken with red and green harissa, falafel made with ras el hanout, and, of course, lamb roasted on a spit prepared the same way as a typical porchetta (he calls it agnelochetta). Angel City has prepared a beer pairing for each menu item, and meanwhile Carb & Nation will be offering a handful of sodas, as well as chorizo-stuffed bacon wrapped dates and fried potatoes with romesco sauce.