Home Uncategorized Chef David Nayfeld is in Town, and Don’t You Forget It 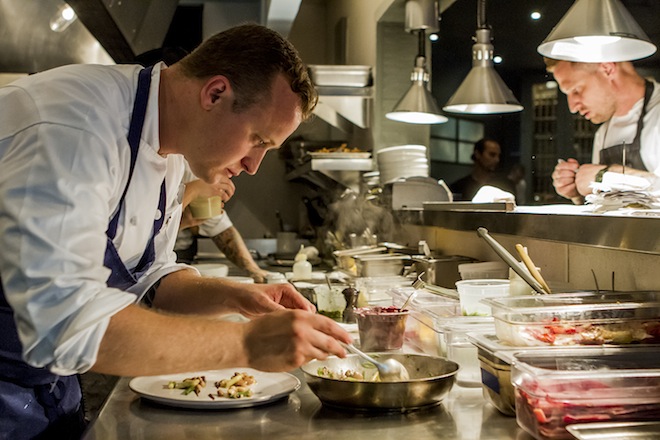 On a recent weeknight, Michael Voltaggio’s ink. in West Hollywood was buzzing. But this crowd was here for not just one chef, but two. Joining Voltaggio was chef David Nayfeld, who was most recently at New York’s starred Eleven Madison Park. Nayfeld has moved cross country to pursue his own restaurant venture(s) with the help of young restaurant kingpin Beau Laughlin and his partners in Cardiff Giant, a hospitality group that runs The Hudson, The Churchill, Clover Juice, and others.

Nayfeld began his culinary training in California, at the CIA, and then in the kitchen at San Francisco’s Aqua. He spent the next decade training at Eleven Madison Park and at some of the world’s most prestigious kitchens, including Albert & Ferran Adria’s Tickets and 41 Degrees in Spain, Jacques Genin in Paris, and Clare Smyth, a Gordon Ramsay restaurant in London.

“After spending the past ten years living outside of California, I could not be more thrilled to be back at a time when the culinary scene in Los Angeles is flourishing,” said Nayfeld in a release.

The dinner at ink. was organized as a sort of introduction, so that Nayfeld could demonstrate his prowess and L.A.’s food lovers could see if the chef was worth his salt. Overall, the dance between the two chefs, who crafted a menu to complement one another, was both entertaining and enlightening.

One chef’s dish was followed by the other’s, with molecular tricks, heirloom vegetables, and prime seafood all serving as focal points. Is this what we have to look forward to when Nayfeld starts cooking downtown? Reps are keeping details under wraps for now, but one thing is certain: there’s another great chef in town, and he’s ready to blow our socks off.