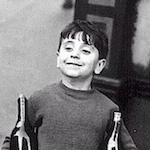 West Hollywood: David Myers’ Comme Ça has a new chef de cuisine. Longtime sous chef Attila Bollok has officially taken over the menu at the casual French brasserie and introduced a number of new dishes. You will still find the restaurant’s famous burger and fries on the menu, along with their popular French onion soup, but the new items are worth a taste. A purple potato, tomato, and goat cheese gratin is a new starter, along with a simple farm salad of roasted carrots, avocado, sunflower seeds, and crème fraiche. Roasted lobster is new among the main courses, and is served with sweet corn, bacon, and spinach. The rack of lamb comes with an eggplant parmesan-like gratin with roasted tomato and pistou. Find a few new cocktails on the list at the bar, including the Gypsy Queen, a sexy melange of basil, lime, and gin, shaken and served tall with a champagne float.

Downtown: Bunker Hill Bar & Grill is no longer run by French chef Remi Lauvand. The restaurant has not yet named a new chef.

West Hollywood: We were sad to hear that as of yesterday, Yujean Kang is no longer in the kitchen at the Sunset Strip’s new haute Chinese destination, Chi Lin. The restaurant’s new chef has not yet been announced.