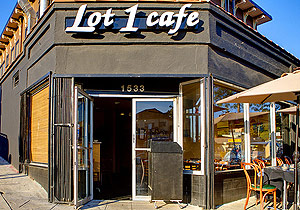 Ever since Josef Centeno left Lot 1 mere days after we gave it two stars (that for a spot with no booze!), I’ve been getting two questions over and over again: 1) “Is it open?” 2) “Is it still good?”

In an effort to provide an answer—and to avoid messing up the kitchen I spent all afternoon cleaning—I stopped in to the Echo Park café last night for dinner.

First off, yes, it’s still open. They’re serving lunch and dinner Tuesday through Sunday, plus weekend brunch (as advertised in a large, red banner out front).

Is it still good? Well, sure. Is it as good as it was before? No. Not even close. In place of hot, puffy popovers, our amuse consisted of brioche toast points with hummus. Remember the cleverly jarred starters like pork rillettes and chicken liver, or the instant favorites like chicharrones in gazpacho? Well, now we’re offered a charcuterie plate (modest), gnocchi with heirloom tomatoes (a highlight), and a beet carpaccio (zzzzz). The new entrees include roasted chicken, pepper encrusted lamb, seared scallops and asparagus, and a roasted vegetable Napoleon. Painfully absent from the new dessert menu: the decadent rice pudding—it was the stuff that dreams are made of.

My initial verdict: it’s all fine, just fine. Sure, some dishes had seasoning trouble (too much, too little), and I’d suggest lowering the prices a bit more, but the joint is still worth a mid-week munch.

Yes, Echo Park now has a number of better, cheaper spots for this kind of food (the Park, 15, Elf). But hey, two years ago locals would have flipped for even this spot. All is not lost.