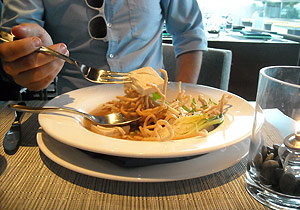 I was never a huge fan—make that fan, period—of Blue Velvet. But if there was one thing the joint had going for it aside from a decent pool and the city’s best unisex bathroom (whatever that means), it was chef Kris Morningstar. Whatever he lacked in consistency and actual cooking skills he made up for in vision, and an admirable enthusiasm for beer (he was an avid home-brewer). So when I we heard he left the downtown spot to open his own joint, I pretty much wrote off the place. But last night, the new spot my friend Evan and I had planned on trying was closed (stupid Tuesdays…), so in an effort to still dine in the name of research, we decided to check out Blue Velvet’s new executive chef (previously under Morningstar) Jonathan McDowell.

The spot is still a little loungey-chic for me, but at 6:45 the sunlight still bounced off the pool, and lent the dark den a little light. (Side note about the pool: all summer long, if you buy a drink with your swimmies in tow you can use the pool—and yes, an iced-tea counts.)

The cocktail list has changed a bit—they took off the horrible Ben Franklin cocktail, which if I remember correctly was a nauseating mix of beer and dark rum. Ugh. Our server clued us into Morningstar’s whereabouts. Apparently sometime between Blue Velvet and the James Beard Award nomination, his backers, er, backed out of the deal. So, as Eater LA reported last week, he’s consulting for 750 ml, which is doing some general, all-over switcheroo-ing.

I wanted to break the story that Blue Velvet’s new chef had turned the whole place around; that he’d finally managed to make the menu’s execution match all those the nifty adjectives. Alas, no. The menu still reads well, with starters like crispy kurobuta pork belly with spiced vinegar sticky rice, and a pea tendril salad with poached egg and an escabeche of carrots. But our Dungeness crab salad tasted like it came from the deli case at Vons—last Friday. The entrees sounded just as lovely, but my halibut with fried baby octopi was overcooked, and don’t get me started on those poor little cephalopods. They didn’t give their lives to become rubber bands, I’m sure. And the term “braised tofu” (pictured) confused me from the get-go, but I was prepared to be educated. Turns out, it was pretty much dumped straight out of the carton of extra firm. These cubes were barely warm, let alone braised.

I’m not giving this place the full-on Rotten Tomato Award (third one down). The service was spot on, the view is great, I plan on abusing that pool privilege soon enough, and the food still sounds great in concept. But if anyone was thinking that the departure of Morningstar would give another chef his time to shine—it didn’t look that way last night.