Home Uncategorized Check It Out: Territory BBQ and Records 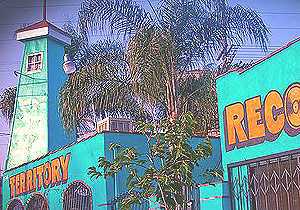 Last Thursday, I headed to the opening for the new Territory BBQ and Records (534 N. Hoover St., Silver Lake), which officially opened Friday. It isn’t fancy, but looks aren’t the point here—it’s barbecue. Specifically, the no-frills North Carolina-style barbecued brisket, hot links, fried chicken and catfish served up cafeteria-style with sides like collards, slaw, and biscuits. The kind of barbecue that isn’t too thick on the ground in L.A., especially not sold alongside stacks of new and used vinyl, the way it is in, say, Austin. At the opening, owners Tony Presedo and Curtis Brown greeted about 200 guests who all seemed to be decked out in what was apparently the evening’s unofficial uniform: Colt 45s and skinny jeans. By the time I arrived at 9 p.m., most of the food was gone, but I managed to snag a pulled pork sandwich on Wonder Bread, which I would like to say achieved the kind of flavor balance that would please the barbecue purists, though I can’t be sure because it tasted so good I scarfed it down before I could make a fair assessment.

Tony told me he and Curtis came up with the idea for the place after the two noticed a dearth of the kind of barbecue spots they craved in Los Angeles, and given that both have experience in both musical and culinary arenas—Tony started the Endless Summer taco truck in Williamsburg and co-ran the Tee Pee Records music label; North Carolina native Curtis used to front the band Bad Wizard—opening a spot that combined the two seemed like a wise move.

Tony says he hopes Territory will become a neighborhood a hang-out, not unlike the auto body shop in Newark, New Jersey, that his father once ran—“There was always a revolving cast of characters there,” he told me. The location, on a somewhat desolate stretch of Hoover south of Melrose, isn’t the most obvious (there’s not much foot traffic), but evidently Tony has a nose for real estate as well as smoked meat: “I think this whole stretch is gonna be the next big thing.”