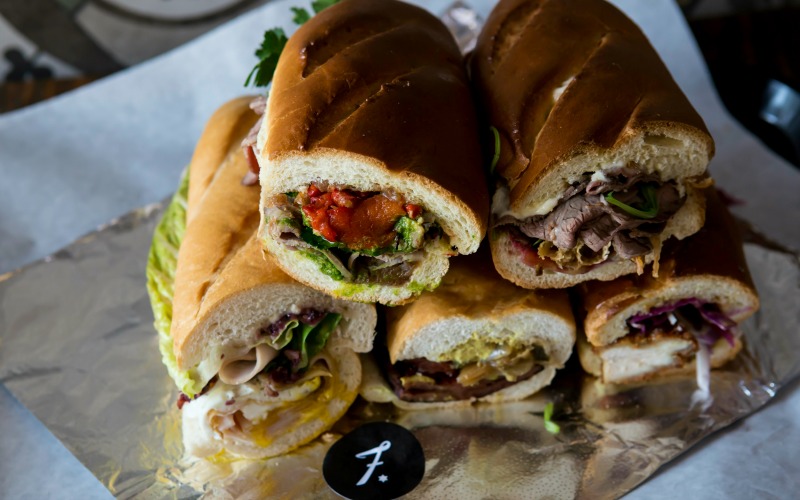 The whole idea of a Seder Plate sandwich is sort of hilarious—if not blasphemous. As anyone who has participated in a Passover Seder meal knows, there’s a whole thing about bread. Like, we Jews can’t eat it, or anything leavened for that matter, for a whole week. So the fact that there’s a Seder Plate sandwich on the menu at Fleishik’s—the “modern Jewish” deli from Eric Greenspan and the gang at Midcourse Hospitality (Erven, Maré, etc.) that opens on Beverly Boulevard on Monday—tells you something about the spirit of the place. Though, don’t get them wrong. Everything on the menu at Fleishik’s (which means “meat” in Yiddish) is legit Kosher. Just ask the Mashgiach, the rabbi health inspector of Kosher dietary laws, who will be on site to oversee all the sandwich making. You’ll also have to get your schnitzel fix somewhere else on Shabbat—the place is closed.

But aside from those fairly strict rules, there are no rules. That Seder Plate sandwich is, of course, a riff on the classic Thanksgiving stack, with smoked turkey, cranberry-walnut charoset, a fried egg, romaine, and horseradish. The Bubbe sports crispy chicken skin gribnis and beet horseradish along with brisket, and crispy onions. Sides include a carroty tzimmis slaw, kugel bites (!!), fried pickles, and onion rings. Bread choices include white, wheat, gluten-free, and challa—because challa.

You can build your own sandwich, and there’s a kids menu, too, with chicken Scnitzel fingers that I secretly hope are a little like BK chicken fries. (Dayenu.) I guess we’ll all have to wait and see on Monday. Shalom!

Where to Get a Philly Cheesesteak in L.A.