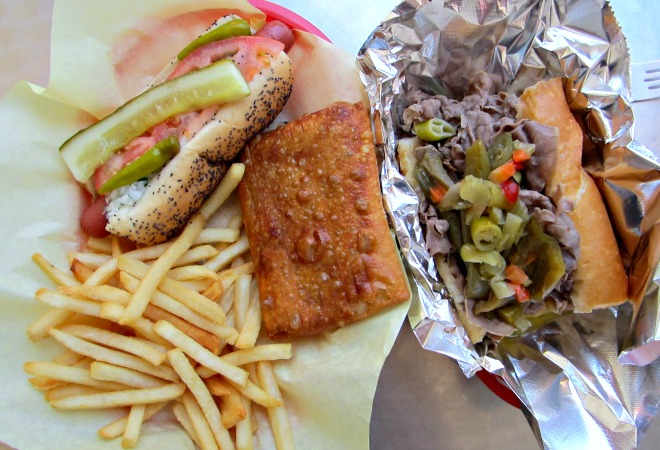 The Trojan Combo at Budacki's

A lot has probably changed since you went to college. While tuition costs are much, much higher and admission rates more stringent, there is one reliable constant that comes with living near a university: cheap, filling, and most likely unhealthy food.

Whether you’ve used up the last of your cafeteria credit, are cramming for a final, or are looking for some greasy food post-rager, a campus needs somewhere where the poor and drunk can convene. For USC, the recently opened Budacki’s Hot Dog may be that place, an L.A. offshoot of an iconic 52 year-old Chicago hot dog shack that was featured on Anthony Bourdain’s The Layover last year.

The rather unremarkable-looking restaurant sits along a block that contains fast-casual chain like Chipotle and Chick-Fil-A, and is populated mostly by students and local blue-collar workers. But even amongst a backdrop of other cheap options, Budacki’s deals blows its competitors out of the water.

Vienna Beef hot dogs—”dragged through the garden” with tomatoes, neon relish, mustard, onions, pickles, sports peppers, and celery salt on a poppy-seed bun—go for $2 bucks a pop on special. Polish dog go for $3. Big, fat, tzatziki-splashed gyros—made with those wonderfully process cones of street meat—go for $5. There is a rather ridiculous list of special “combos” that bundle hot dogs, polish dogs, chili dogs, corn dogs, cheeseburger and such along delights with french fries and “a can of pop.” Most are under $10.

But the king of these combinations, in both caloric and monetary value, is the “Trojan Combo” ($12), which combines a fully-dressed Chicago hot dog, an Italian beef sandwich, and a “pizza puff,” a deep-fried pocket of dough stuffed with marinara sauce, mozzarella and bits of ground sausage. Along with a basket of fries, it’s a lot of food, and most sensible customers would split it with a friend (though one person consuming the whole lot isn’t uncommon, the cashier tells me).

Is this the best Chicago street food in L.A.?  Debatable. But the Italian bread is piled high with tender (but under-seasoned) slices of roast beef, spicy giardiniera, sweet peppers, and a ladle of salty jus gravy. The crispy, gooey pizza puff tastes like what a Hot Pocket aspires to in its wildest dreams, and the Chicago dog—well, who doesn’t love a good Chicago dog? As a combination, this midwestern Holy Trinity hits every corner of the Chicago street food pyramid.

If you find yourself near Exposition Park, the Natural History Museum, or the California Science Center, Budacki’s offers a cheap All-American meal with old-fashioned charm. That’s something even those who’ve outgrow their college habits can appreciate.