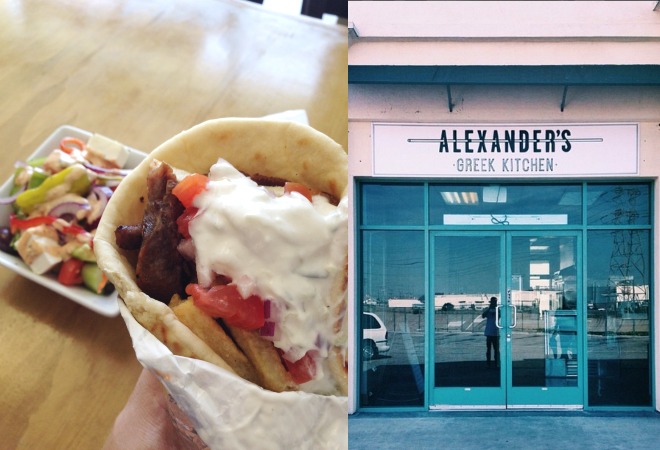 A good lunch (read: non-fast food) is pretty hard to find in Vernon, a largely industrial neighborhood southeast of Downtown populated by manufacturing plants and warehouses.

Perhaps that’s why local workers have taken a shine to Alexander’s Greek Kitchen, a two-month-old, family-run restaurant located a short walk from the concrete banks of the L.A. River. Brothers Alex and Konstantin Sotirhos run the shop with help from their parents, 30-year industry veterans who can be seen in the kitchen grilling oregano-rubbed lamb chops and chicken skewers. With traditional Greek dishes like fasolia(white bean salad), saganaki(pan-fried Kefalograviera cheese with lemon) and horiatiki (fresh Feta, Roma tomatoes, Kalamata olives, cucumber, bell peppers, red onion and capers) the food is far more homey and comforting than you’d expect from a strip mall Greek spot.

One highlight in particular are the thick gyro pitas ($7), stuffed with either shaved pork or chicken, french fries, diced onions, tomatoes and a thick, cooling tzatziki sauce. The pork gyro—which according to the menu is marinated and hand-stacked onto spits daily—is flavorful and juicy, yet nicely crisp on the edges in a way that might remind you of good carnitas.

Along with a side of Greek salad, or oven-baked potatoes tossed with lemon and garlic, it makes for a terrific lunch in an area of town whose previously culinary claim-to-fame was something called the “Hockey Burger.”