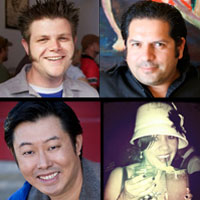 Starting Monday, you’ll see some new bylines here at the Digest blog. As part of our plan to expand Los Angeles magazine’s food coverage online, we’ve brought in four of the city’s premier food and drink experts to lend their perspective and voices to the magazine’s digital space. So, who are they?

[Somewhere in the distance, a high-hat starts tapping out the beat. I grab the mic…]

First up on the keys we’ve got Eddie Lin. Better known as the twisted tentacle behind the blog Deep End Dining, Lin knows the ins and outs of the city’s thriving Asian food scene. When he’s not busy blowing the mind of Huell Howser on public television (yes, we think that cameo is the coolest thing on his resume) or producing his own Web series, Kamikaze Kitchen, he’ll be filling us in on L.A.’s Asian eats, bizarre bites, and more.

Next up on the shakes and stirs is Caroline On Crack. The established cocktail blogger has been hailed as the city’s finest drinking diva, winning an L.A. Weekly Webby award for best cocktail blogger in September. Here, she’ll be taking an in-depth (and mildly in-toxicated?) look at L.A.’s bar scene from inside and out, showcasing her favorite libations and chatting with industry insiders.

Then ladies and gentlemen we’ve got the burrito bandito, the maestro of mole, the taquiero of terror: Bill Esparza. The “reverse coyote,” as he’s been dubbed, is L.A.’s Latin food guru as Street Gourmet LA. A professional saxophonist by day, taco tormentor by night, Esparza will lend his expertise to everything from birria to pupusas to mescal and everything in between.

Finally, the grits to my shrimp, the kimchi to my galbi, the flatbread to my Bäco, everyone give a warm welcome to Randy Clemens! The beer expert and author of the Sriracha Cookbook will be helping guide the blog’s overall editorial direction as the Associate Digest Editor, as well as sharing his know-how on all things food news, brews, and vegan. (He sticks to veggies when he can.) He also happens to be a former Los Angeles magazine editorial intern. We will no longer make him fetch coffee.

I could think of no people more qualified to carry Los Angeles magazine’s reputation for credibility and informed perspective into the digital sphere. It’s my blogger dream team, and I couldn’t be more excited about their addition to the family.

Stay tuned for the launch of team Digest come Monday, and for the blog’s all new look (bigger pictures! more capabilities!) in the coming weeks.