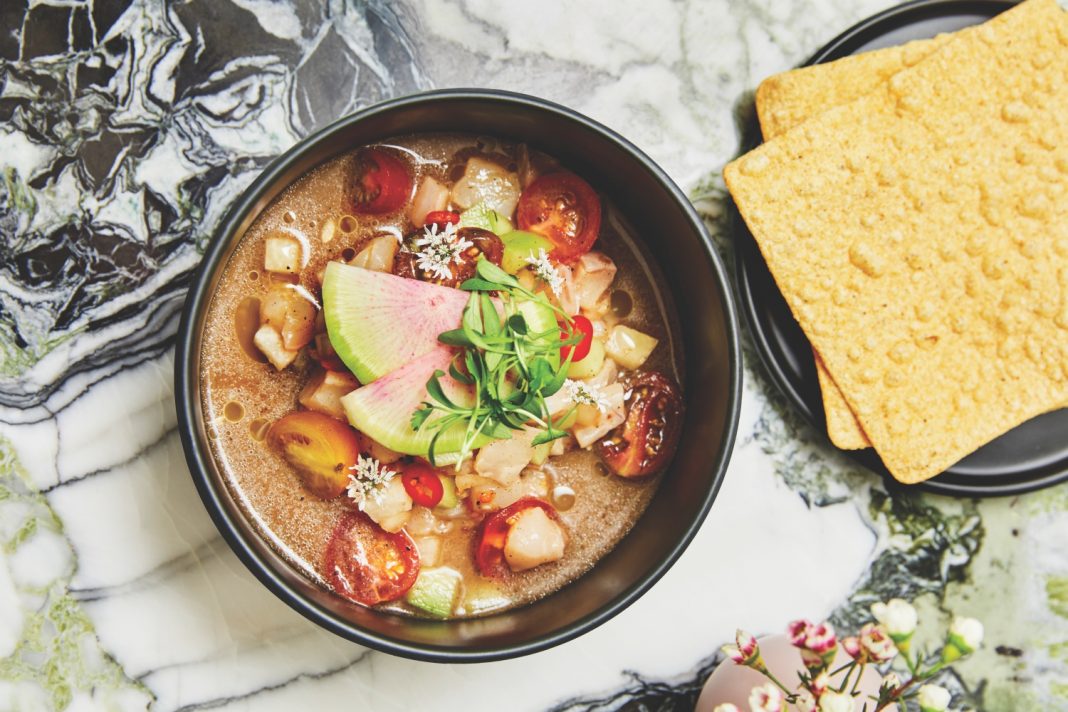 Clad in a linen shirt and a double-breasted white jacket—a look that might befit a dapper naval officer on leave on some Caribbean island—Octavio Olivas sets the scene behind his restaurant’s marble-topped bar. The 39-year-old former lawyer, who ditched his day job in 2012 to open a roving pop-up dubbed Ceviche Project, cracks open a rust-colored chocolata clam from Baja. He adds a drizzle of citrus juice and a spoonful of finely diced xni-pec (a Yucatán riff on pico de gallo made with habanero peppers) before sliding it across the counter. An icy lager from Mexican craft brewery Cervecería de Colima sits nearby. You could be forgiven for letting your mind drift elsewhere—Mexico City, Cabo, Tulum, Puerto Vallarta—basically anywhere other than the busy, gridlocked section of Silver Lake’s Hyperion Avenue where Ceviche Project has taken up residence, a quietly tucked-away palm-frond oasis of calm and, well, clams.

A modern mash-up of a pristine raw bar and a stellar cevichería, the restaurant began as a concept that Olivas showcased in swank hotels and hip bars, first across L.A. and eventually to various cities in Mexico. But after years of wanderlust, Olivas sought to give Ceviche Project a permanent home, transforming a 28-seat sushi bar into a moody, intimate seafood counter (he spent so much time constructing the space that the upstairs neighbors mistook him for the building’s handyman). It’s here you’ll find Olivas each night, neatly assembling tostadas of big-eye tuna with a spoonful of yuzu-habanero sorbet and crunchy curls of shaved celery. A gleaming ice-packed display case touts the day’s oceanic prizes: razor clams from Oregon, sea urchin from Santa Barbara, or sweet snow-crab claws from Canada paired with a spicy mole-inspired dipping sauce made from sesame seeds and chile de arbol. There are options beyond seafood, including a Parmesan-dusted carpaccio made with thinly sliced mushrooms or a citrus salad amped up with toasted pepitas, mint, and a glug of chile-infused olive oil. But ultimately you’re here for fruits de mer: At some point in the meal, Olivas might slip you a shard of fresh tostada dotted with sturgeon caviar.

In a city where a solid plate of ceviche is practically a birthright, Olivas’s garnished creations—a charred salsa here, a swipe of avocado mousse there—add intrigue without overshadowing the starring seafood. Add a glass of natural wine (try the puckery orange wine from Austria) and a grooving bossa nova soundtrack, and the result is one of the more charming date spots to hit L.A. in some time. That you also get to witness Olivas cast his spell behind the bar is a squeeze of lime on top.

3 New Restaurants to Try in April