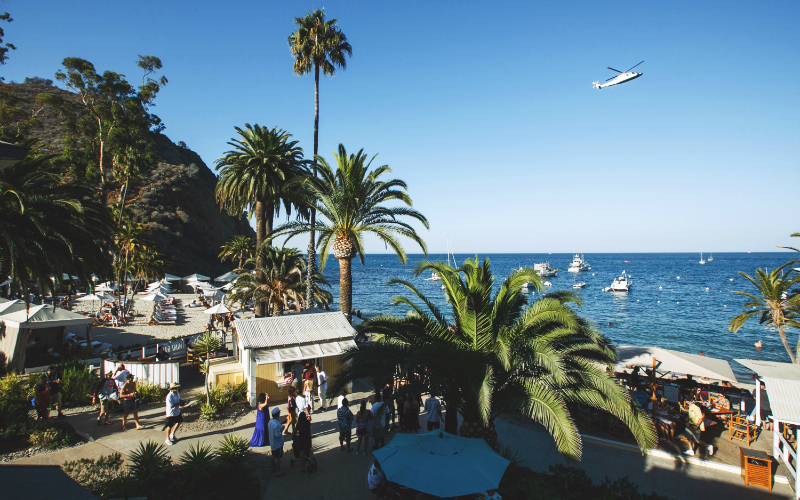 In the 2008 movie Step Brothers, several scenes take place at an outdoor gala called the Catalina Wine Mixer. So when Ben Villalobos moved to Catalina from his home in England and took on the role of Corporate Director of Special Events at the Catalina Island Company, one of the first things he asked his new coworkers was, “So, when is this event?” They informed him that the party from the movie was purely fictional. He decided it was time for life to imitate art.

The first Catalina Wine Mixer was only one day long, but it has since expanded to a three-day festival. This year it takes place from Friday, September 22 to Sunday, September 24, at Descanso Beach Club. In addition to wine tastings, there’s a theatrical screening of Step Brothers, a costume contest inspired by the movie, DJs, and live music. G. Love and Special Sauce, Everett Coast, and The Wailers perform Saturday. On Sunday, the musical guests include PPL MVR, who perform dressed as yetis, and The Dan Band, who have appeared in The Hangover and Old School. General admission tickets are $69 for Saturday, $85 for Sunday, or $149 for a two-day pass.

In Step Brothers, Adam Scott’s character refers to the Catalina Wine Mixer as “the biggest helicopter-leasing event in the Western Hemisphere since 1997.” In reality, that’s not quite accurate—the event is only in its third year, and most visitors get there on the ferry—but helicopter service to the island is available (packages range from $207.50 to $1,021.50).

Oh, and in spite of the name, the Catalina Wine Mixer is not really a wine festival in any traditional sense. Some wine will be available for purchase and VIP tickets include complimentary wine tasting hours on Saturday and Sunday, but this party isn’t really meant for the oenophile crowd.