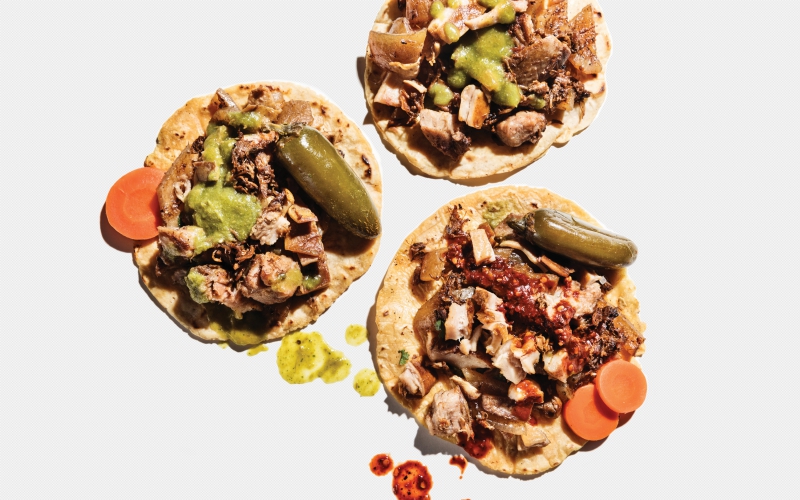 Thwack. Thwack. The tarp-covered courtyard near 61st and Avalon where Carnitas El Momo sets up on Saturday mornings is tough to spy from the street, but the thud of meat cleaver against wood acts as a homing beacon.

Romulo “Momo” Acosta, the 73-year-old patriarch behind the revered carnitas operation, has been at it since before dawn, cooking up to a quarter-ton of pork in wide copper vats filled with hot seasoned lard. Three to four hours later, the meat emerges from its roiling bath, glistening, molasses brown, and exceptionally tender. “My dad has been selling carnitas since 1976,” says Juan “Billy” Acosta, gesturing to a warehouse across the street. “That used to be a sewing factory with 300 employees. He’d go every Saturday and completely sell out.”

In Mexican American communities across L.A., weekends are for carnitas. Along the Slauson Corridor east of the 110 freeway, canopied vendors pop up parallel to the abandoned train tracks, offering succulent cuts of shoulder, skin, snout, ear, and ribs by the pound. Due west, Tacos Los Güichos, a truck famous for its evening al pastor spit, opens around 8 a.m. to feed crowds clamoring for Mexico City-style carnitas, minimally seasoned to highlight the porcine musk. Several blocks north, Carnitas Los 3 Puerquitos hawks carnitas estilo Michoacán, a sweeter style that develops a dark glaze as it simmers.

The product of dedicated specialists called carniteros, these pork parts are braised in their own fat confit-style, steeping until they alchemize into the ultimate expression of pig. Anything else is carnitas in name only. Dedicated practitioners aren’t confined to Southeast L.A.—there’s Carnitas El Barrio in Watts, Villa Moreliana in Grand Central Market—but no one has refined the art quite like El Momo; that’s what tends to happen after decades of practice.

The elder Acosta grew up in Salamanca, a refinery town in the state of Guanajuato. He found work in the U.S. as a welder, but after an arm injury he shifted to carnitas, using a viscid Coke-syrup-infused recipe borrowed from his father, a pig farmer and butcher.

More recently, Acosta and his family have grown the business, selling seven days a week from a roving trailer. Before ordering, each new customer is offered a sample of migajas, extra-carmelized pork crumbs scraped from the bottom of the pot. Whether you opt for jiggly curls of cuero (skin), buche (stomach), maciza (shoulder), or a mix of all three, Acosta says to forgo salsa the first time and dress your taco with only a dribble of vinegar from a pickled jalapeño. That’s real Salamanca style. For times and locations, follow @carnitaselmomo.