Home Business & Real Estate Cannabis Beverage Sales Are Booming and One Local Company Is Leading the... 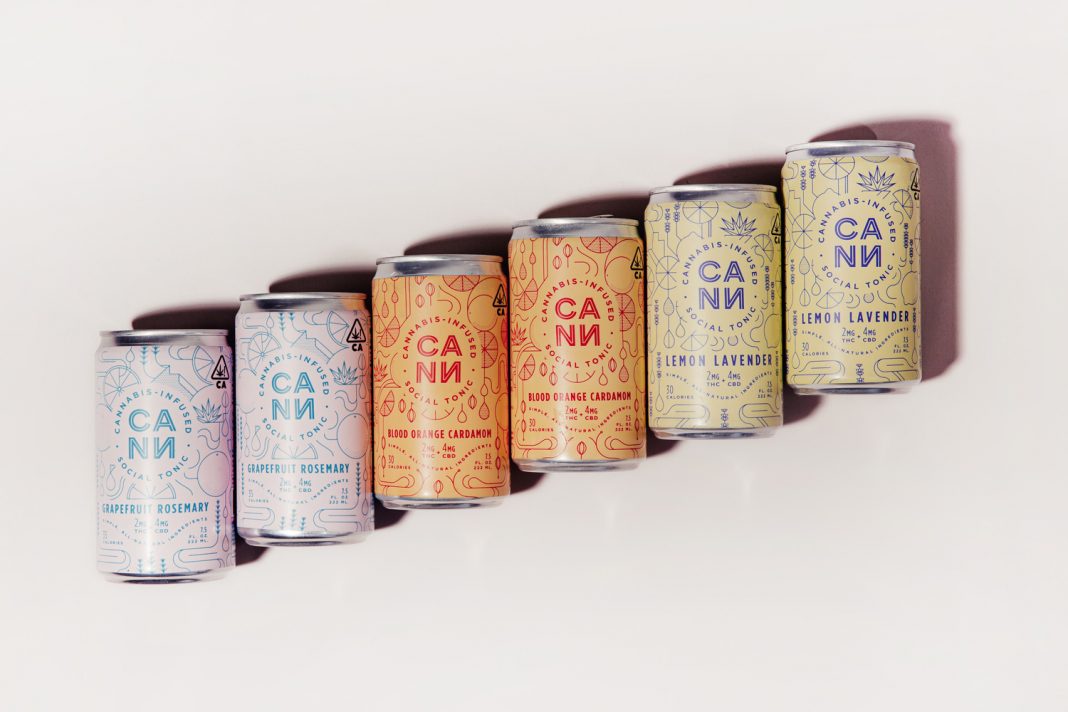 Forget the many buzz-inducing gummy candies and chocolate bars. More and more cannabis consumers are opting to drink their drug of choice. The cannabis beverage market, worth $901.8 million in 2018, has grown 45 percent annually in the past two years and is expected to reach $5.8 billion by 2025. One of the category’s breakout hits is the Venice-based Cann. Launched in June 2019, Cann has quickly risen to the top of the category, thanks to its stylish packaging, subtle flavors, celebrity fans, and the business-school acumen of its founders.

“Cann is one of the brands that has really led the charge in making these beverages mainstream,” says Kiana Anvaripour, the CMO of Sweet Flower, an L.A.-based dispensary with locations in Studio City, downtown, the Fairfax district, and Westwood. Cann is Sweet Flower’s top-selling cannabis beverage by volume, accounting for 50 percent of total sales in the beverage category. Sweet Flower’s Cann sales have doubled since March, which Anvaripour attributes to “‘canna-curious’ consumers seeking healthier alternatives to help them manage the day-to-day.”

Cann’s founders initially cooked up the product as an alcohol alternative. “Our twenties were very, very heavy-drinking years. And now that we’re in our thirties, a hangover is debilitating,” says cofounder Jake Bullock, 32, a Stanford business school grad who met his business partner, Luke Anderson, also 32, an alum of Harvard Business School, while they were working at Bain & Company consulting firm. The two thought of Cann as a way, Bullock says, “not to replace alcohol, but to drink 20 to 40 percent less than we did before.”

It’s a philosophy in line with the way many are looking to live now. Half of U.S. adults say they’re trying to drink less alcohol, according to 2019 data from market research firm Nielsen. Investors have taken notice. In January, Cann raised $5 million in a funding round led by Imaginary, a retail-and-tech venture capital firm cofounded by Natalie Massanet, the creator of Net-a-Porter, and cannabis VC firm JM10. Imaginary wasn’t expressly vying for a cannabis brand to back, but the idea of a chic alcohol substitute was appealing, as was the fact that Cann is relatively low dose: each beverage has just 2 milligrams of THC, compared to the usual 5 or 10 milligrams. 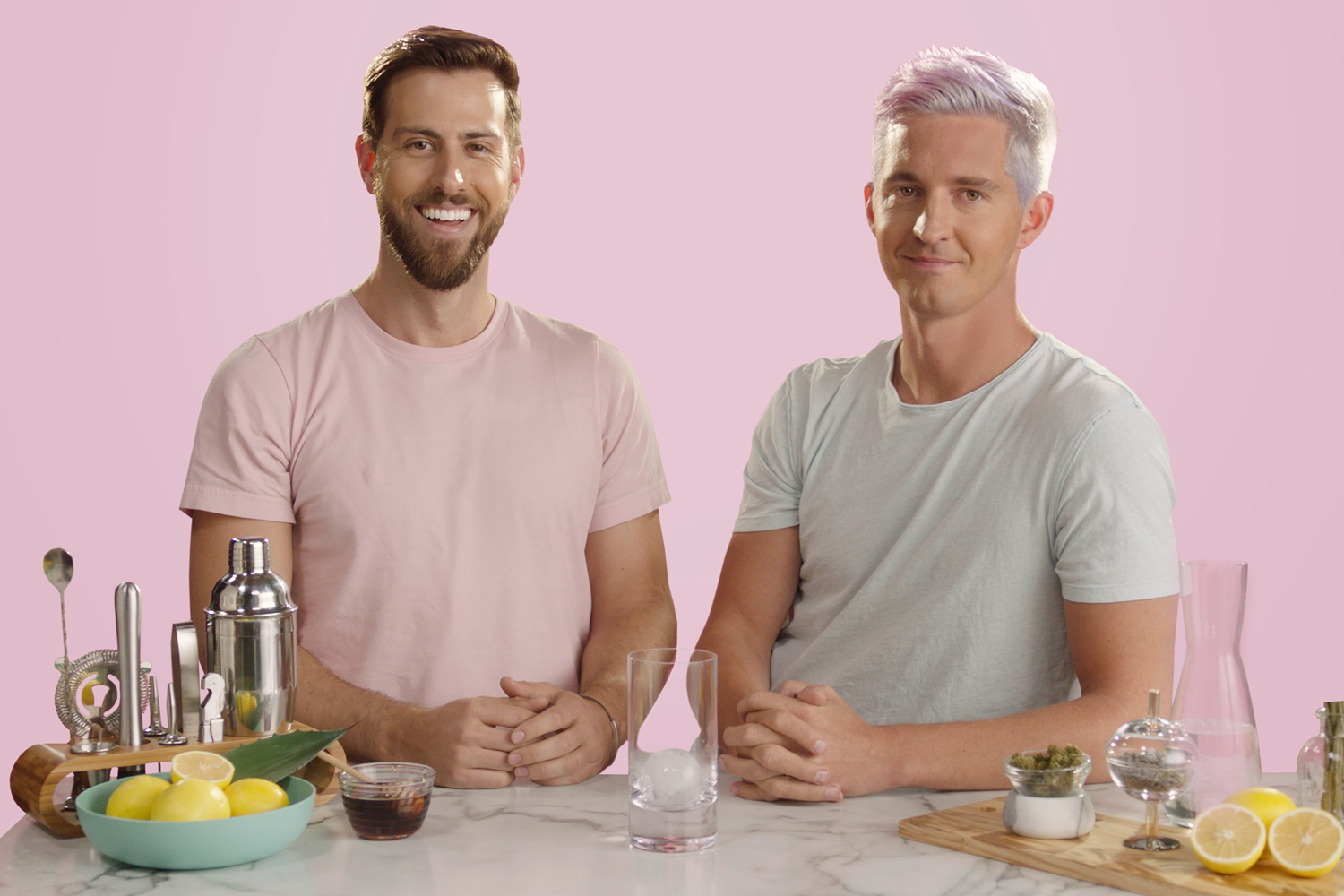 “We loved that Cann focused on low-calorie, low- and controlled-dosage THC,” Massanet says. “We hope that one day Cann will be as successful as Coca-Cola.”

Others in the industry are less bullish. “I don’t doubt the beverage category will be big, but there’s this perception that it’s absolutely meteoric, and that’s just not the case yet,” says Mitch Baruchowitz, managing partner at Merida Capital Partners, a cannabis-focused private equity firm. “I’m not sure if consumers will walk into a dispensary, look at 52 types of flower, edibles, patches, tinctures, sublingual tablets, and then go, ‘Let me look at the cooler and grab one of those drinks as well.’”

Though Cann was designed for fraternizing—it’s sold in six-packs that retail for $24 and bills itself as a “social tonic”— it’s been quite popular in the antisocial pandemic era. After selling only 150,000 cans in its first six months in business in 2019, Cann sold 1.85 million cans in the first ten months of 2020, and boldfacers like Chelsea Handler have Instagrammed themselves drinking the product. “The marketing celebrities are doing on our behalf during COVID has been crazy,” says Anderson. “We’ve never paid for posts in our company’s history, and we have not been asking celebrities to post about the product.” Some celebs—including actors Gwyneth Paltrow, Rebel Wilson, and Darren Criss; NBA star Baron Davis; YouTuber Casey Neistat; and musician Tove Lo—have gone a step further and have invested in Cann. “People we’ve dreamed of paying to work with us are saying, ‘I believe in what you’re doing, I believe [drinking too much] is a universal problem, and I want to be part of the solution.’”

Cann’s flavoring and branding has been key to its success. The pastel cans were designed to look like they “would fly off the shelves at Whole Foods and not remind somebody of PTSD from a pot brownie in college or look like they came from a gas station in 1995,” Bullock says. “I’d never been to a dispensary before starting this company, and found all other cannabis products to be very stigmatizing. So I really understood the idea of being not-cannabis-forward,” adds Anderson. Half of Cann’s customers are weed newbies or teetotalers—think thirtysomething professionals and moms who might otherwise reach for a glass of chardonnay—which is by design. “Extreme, daily cannabis users are never really going to be our customer,” says Bullock. “If you’re trying to find the cheapest way to get high, our product actually keeps you from getting too high.”

Flavors like grapefruit rosemary or lemon lavender have been developed by a food scientist formerly at Unilever and are free of preservatives and not too sweet. The company recently rolled out Roadies, concentrated liquids to mix with seltzer or other drinks, that are more travel-friendly and allow for customized dosing. Dozens of new flavors are in development, with the latest, cranberry sage, pegged to Thanksgiving.

It’s all part of the Ivy Leaguers’ plan to take their low-dose cannabis beverage more and more mainstream.

“We often joke that we’re selling light beer to speakeasies at the end of Prohibition,” Bullock says. “We want to get to a place where there’s beer, wine, and Cann at every party.”

Local dispensaries are stocking their shelves with a growing array of beverages packed with THC and CBD. Whether you’re looking for something that tastes
like a microbrew or a White Claw, options abound.
Here are five: 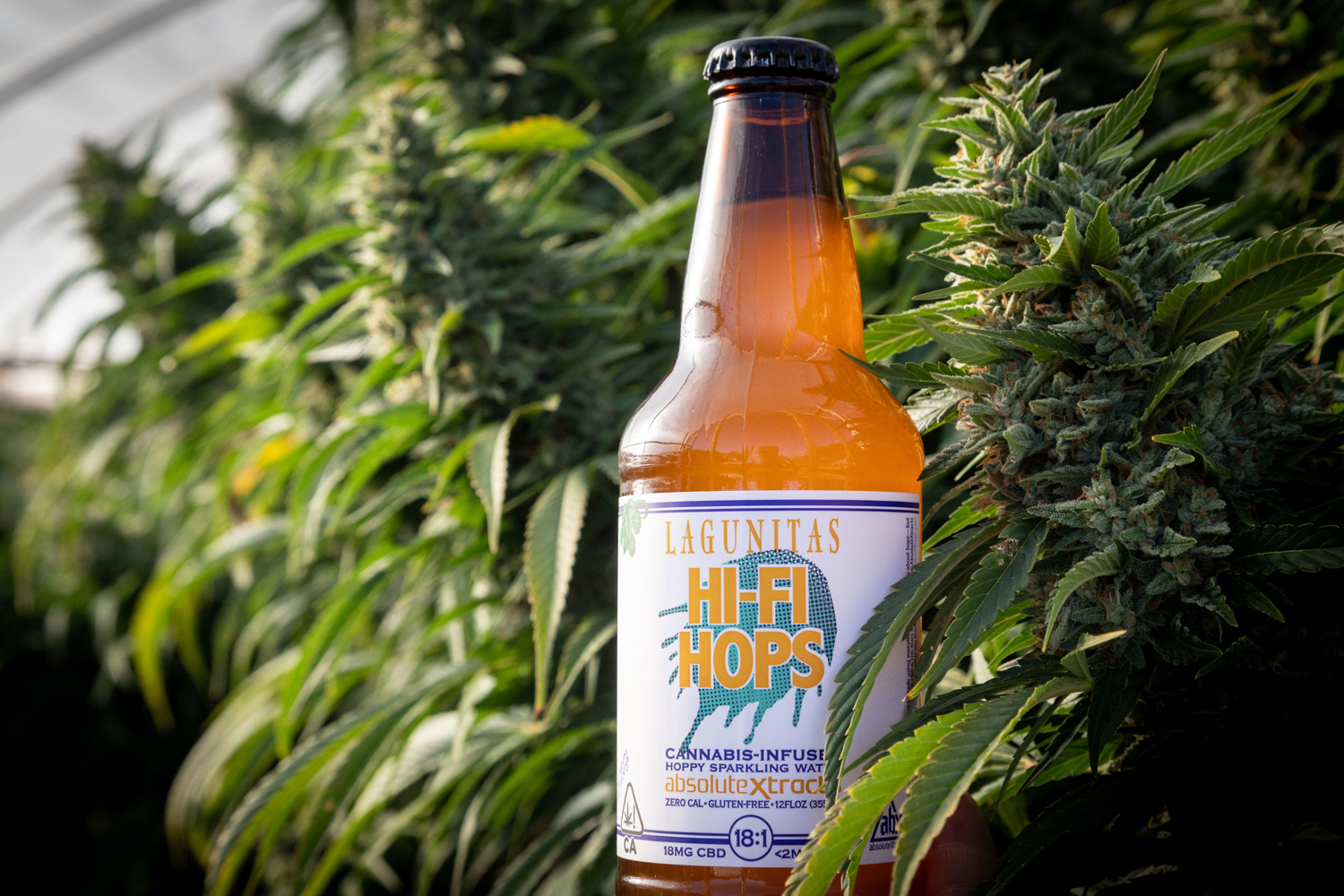 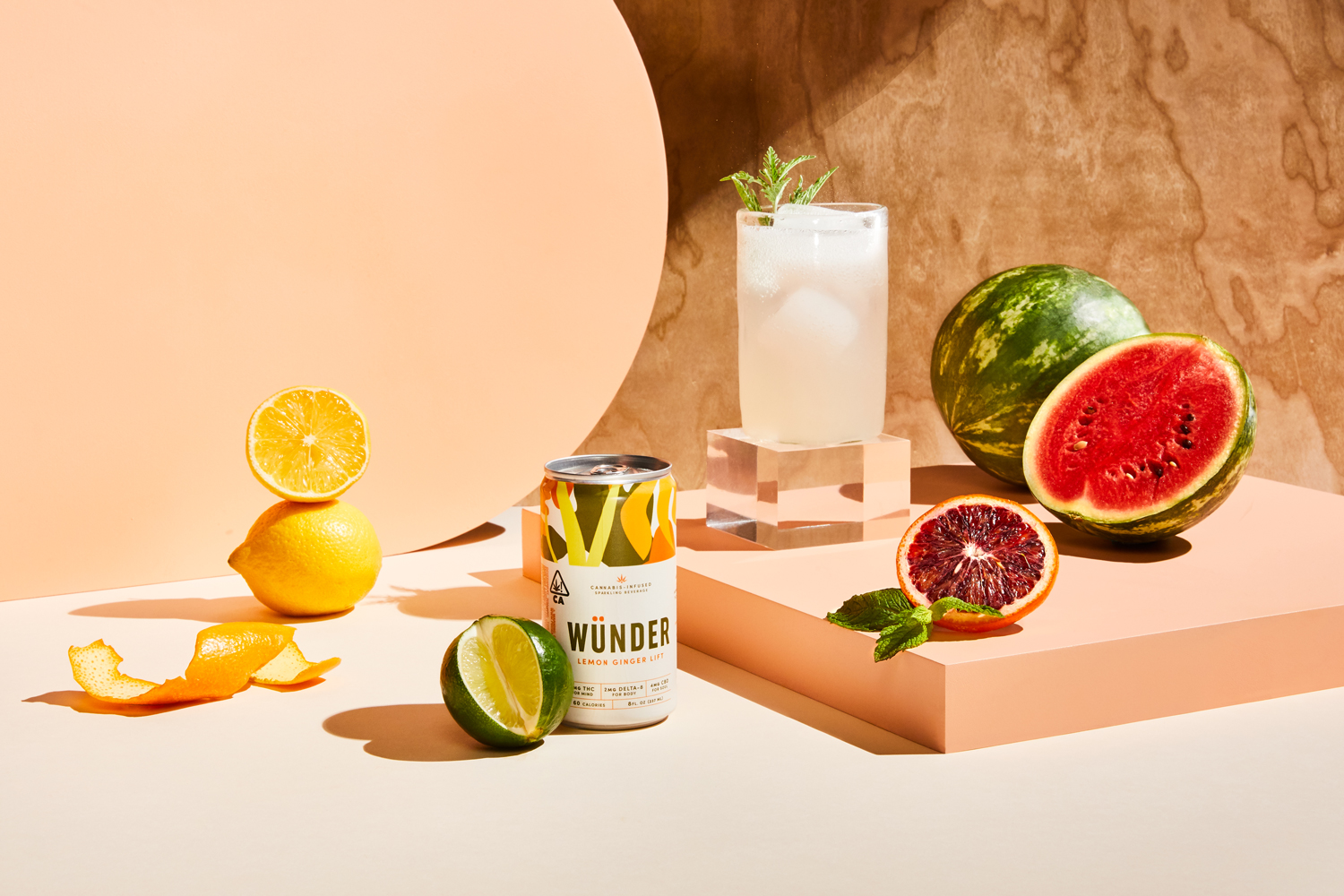 Launched in July, this is the first beverage to include Delta-8, a unique low-psychotropic cannabinoid promising physical relaxation and mental clarity. $6 each at The Pottery, 5042 Venice Blvd., Mid-City, thepottery.la. 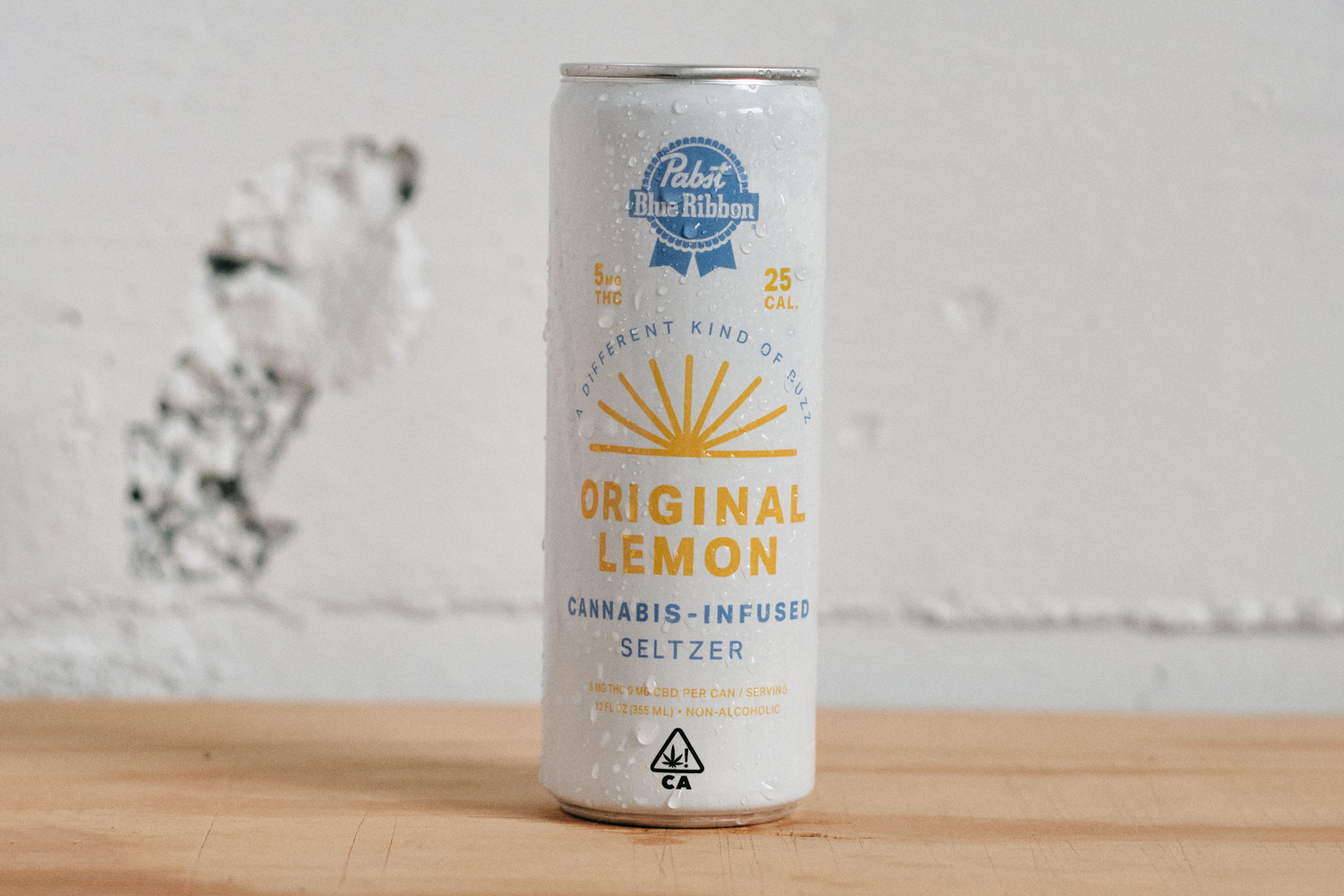 The dive-bar beer brand entered the cannabis space in October—sorta. This lemon-flavored seltzer is actually made by a separate company launched by PBR alums. $25 for a four-pack at KTown Collective, 7382 Melrose Ave., Fairfax district, ktowncollective.com. 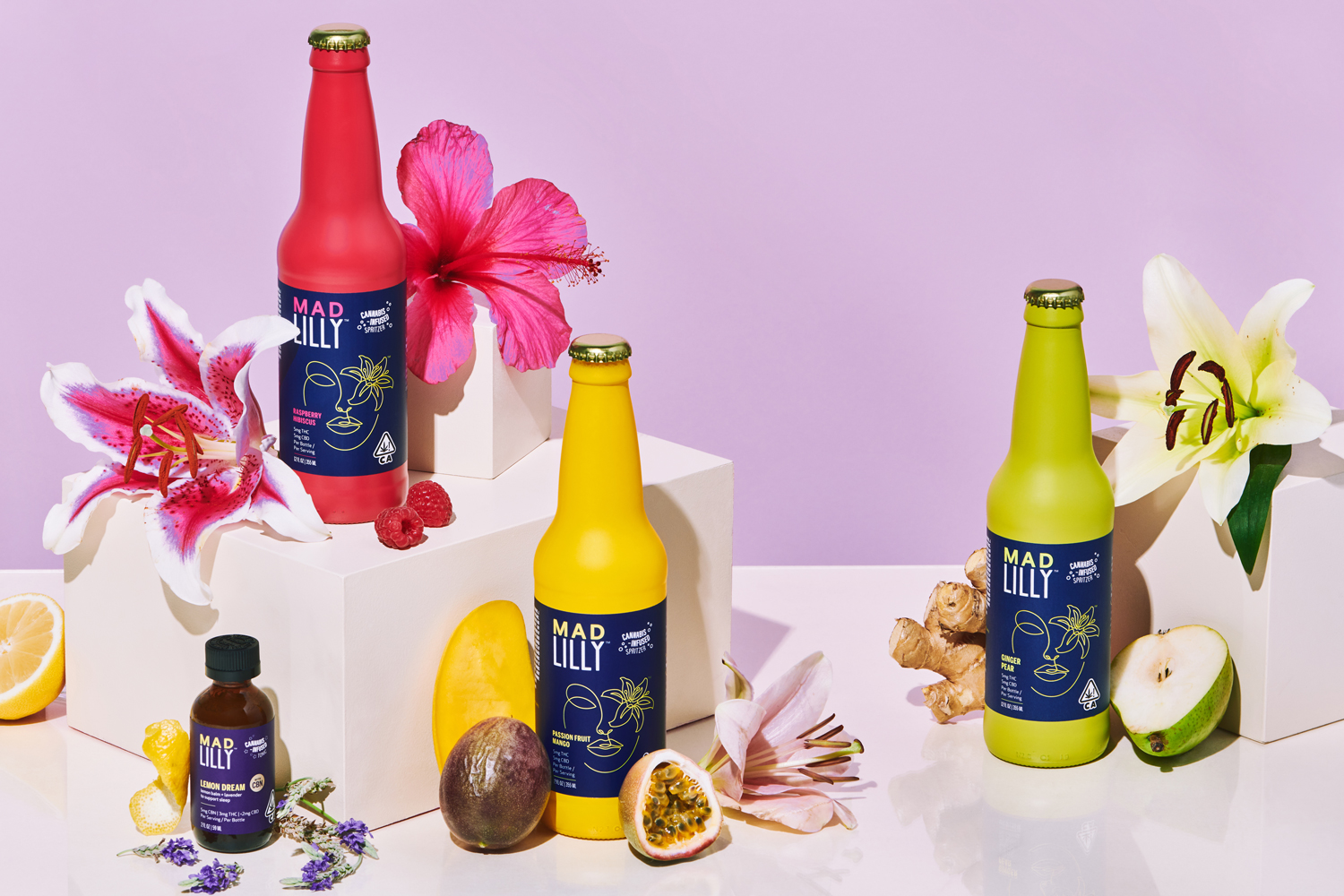 Available in SoCal since July, this entry balances 5 mg of THC and 5 mg of CBD, has no added sugars, and contains just 30 to 50 calories per bottle. Flavors include raspberry hibiscus and passionfruit mango. $9 each at Eaze.com.