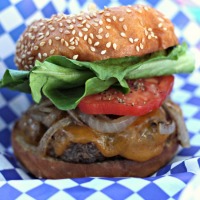 A 15-minute drive north of Glendale can feel like a leap back in time when you arrive at historic Verdugo Hills Golf Course in Tujunga, which first opened in 1960. In fact, the oak-shaded clubhouse often gets compared to something out of the ’80s classic Caddyshack, but perhaps a little less rowdy.

You can whack a few balls at the driving range, shoot a round of eighteen, or play frisbee golf on the scenic, hill-covered course (until 9:30 p.m. every night!)—all for budget, bare-bones prices. A nose-in-the-air country club this is not.

The single best reason to visit, though, is Tee’s on the Green, a modest golf course café opened by Tiffany Casper four years ago (fun fact: her first job ever was working at the golf course’s old snack stand, The Putt Stop). Whether or not you’ve spent the last couple hours swinging away, stopping in for a burger and a draft beer is a grand idea.

The cheeseburger ($5.75) is far superior to what you’d expect from a snack shack, made with a thick beef patty, griddled onions, and a dollop of tangy house-made special sauce. The “Hot Mama” burger ($8.75), topped with pepper jack cheese, habanero mayo, and sautéed serrano peppers on a jalapeño-cheese bun, is another popular, and fiery, order. There’s hot dogs, veggie burgers, sourdough BLTs, fried zucchini and onion rings too, as well as other things you’d find at your local greasy spoon, except prepared with much greater care and quality. Casper knew that she would have a captive audience at the golf course, but wanted to offer food that stood on its own.

Ice-cold beer, of course, is still the biggest draw, and it’s certain that you’ll find regulars gathering inside the sticker-covered man cave (with kitschy signs like one that read “don’t cry over spilt milk, it could’ve been beer”) or lounging outside on the shade-covered picnic tables with pitchers for frosty beer. There are a few craft brews to be had—including taps from Golden Road Brewing—but most customers opt for the standard Miller, Bud, and Coors. They made a damn fine Michelada too.

Tee’s on the Green offers a fine slice of nostalgia along with its burgers, but as with most things, it probably won’t last forever. The land on which Verdugo Hills Golf Course sits was sold to condo developers several years ago, who eventually plan to build 229 homes on the property. But there’s good news: The zoning process is currently stuck in bureaucratic limbo for the foreseeable future, meaning that there’s plenty of time to get in a few rounds and enjoy a burger or two. Who knows, with enough petitioning there’s a chance Verdugo Hills might end up as a historical landmark.

Is Austin Reaves the Cousin Greg of the L.A. Lakers?