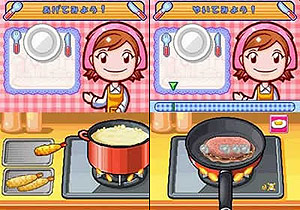 With the advent of Nintendo Wii (if you don’t have one, it should be first on your gift list) there’s been an explosion in the number of foodie video games. I suppose if people will spend $49.99 to swing at virtual tennis balls, they’ll spend $49.99 to chop virtual zucchini. Here are a few I’m hoping to try once somebody checks the Wii off MY list:

Currently at war with PETA over the amount of meat prep involved, Cooking Mama is now on its third edition. In this poppy, Anime-inspired game, players use their Wii controller to try and follow recipes as accurately as possible, from slicing to seasoning. The newest edition, Cooking Mama World Kitchen, is fresh in stores and features recipes like onion rings and flounder.

Iron Chef America is still in development, but from what I can tell it will follow the same general formula. Players can choose to be Morimoto, Mario Batali, or Cat Cora (not sure why Michael Symon’s not in there) and cook up a variety of dishes using the “secret ingredient.” From the online demos, the 3D-animated version of Batali is as frightening as you might think. Ditto Alton Brown.

Speaking of scary, there’s also the Hell’s Kitchen game which came out a while back. It’s not as physically interactive as the other Wii-specific games (this one can be played on a PC), but it does feature an angry Gordon Ramsay who coaches you through properly cooking 10 dishes at once. You also get to play waiter, taking orders, getting dishes to diners on time, etc. (Probably less of a thrill for the thousands of Angelenos—including this one—who have actually been servers.)

Personal Trainer: Cooking is brand new for Nintendo DS—you know, the “educational” hand-held system that supports Brain Age, among others. This isn’t so much a game as it is an actual cooking tool. Users can watch demonstrations of proper knife skills and cooking techniques, and make recipe-specific grocery lists that they can check off “with a tap.” To avoid getting beurre-blanc on the screen, it also works with voice control.