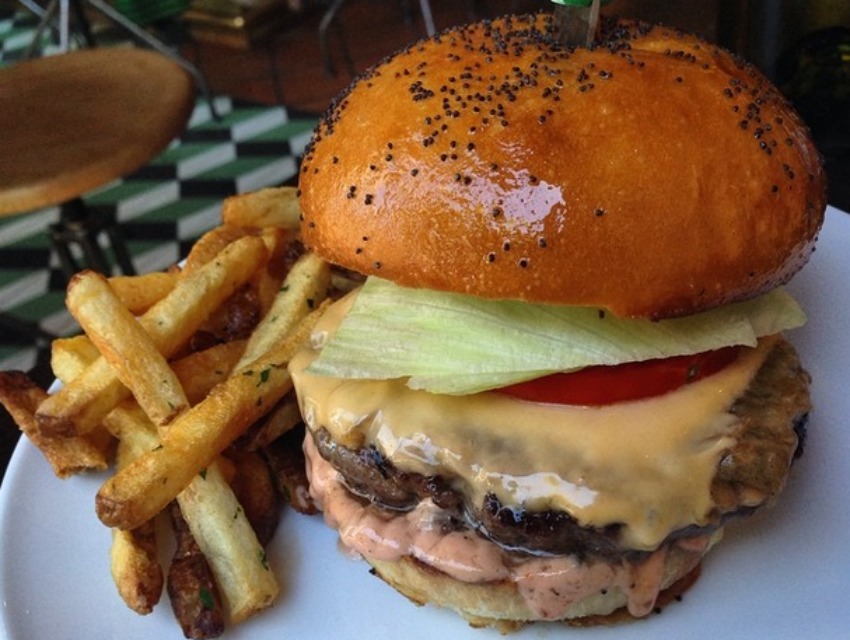 From In-N-Out to Father’s Office, we are a city that takes our burgers very seriously. In this recurring feature, we survey new and exciting burgers around town then tell you if they’re worth stuffing in your face or not. You know, for science.

When Republique first opened late last year, most first-wave diners perceived Walter’s Manzke vaguely Baroque restaurant on La Brea as a modern resurrection of the grand French bistro, accented perhaps with a few touches of Italy and Asia. And at that point they were probably correct.

But as the menu grew and expanded, it became clear that Manzke’s masterplan didn’t merely stop at “stylish European bistro” but instead aspired towards something like “that amazing restaurant that has all the things, all the time.”

So, now, while your meal can consist of steak frites, house-made charcuterie, a few oysters, and a glass of Semillion at dinner, it can also involve Margaret Manzke’s stellar pastries, breads and fresh-pressed juice for breakfast, kimchi fried rice or shakshouka for brunch, and a ridiculously broad range of other dishes served at different periods during the day.

Which is to explain—in a roundabout way—why you should be excited for Republique’s new dry-aged burger ($14), served daily during lunch, from 11 a.m. to 3 p.m.

Meat: This sauce-dripping beast begins with a thick, dry-aged, grass-fed patty made from a blend of ground chuck and steak trimmings from the restaurant’s glass-enclosed meat locker, which sits in full view of the dining room. It’s seasoned with the proper amount of salt and pepper and cooked medium by default, which provides a substanial seared crust on the outside while not drying out the meat or obscuring the rich flavor (subject of a future post: why medium is a better temperature for gourmet burgers than medium-rare).

Bun: With pastry chef and baker Margaret Manzke (Walter’s wife) helming the ovens, you’d expect the poppy-seed studded brioche bun to house-made. Well, it is. Soft, sweet, and supportive, this airy bun has the same qualities you’d look for in a caring lover. It’s simply one of the better burger buns we’ve in a long time.

Toppings: Iceberg lettuce. Tomato slice. American cheese. 1000 Island Dressing (house-made with extra relish).  The toppings on Republique’s burger are quite minimal, and your opinion on them will probably be informed on whether you grew up eating burgers in Souther California or not. But while this burger may draw comparisons to In-N-Out, it’s actually more reminescent of Pasadena’s Pie-N-Burger, since Manzke chose to omit the raw onion and emphasis the tang of chopped pickles instead.

Extras: A whole cone of herb-dusted, hand-cut french fries are included (plus ketchup). Fried in a combination of beef fat and peanut oil, they are quite good.

Is it too early to deem Republique’s burger an instant L.A. classic? Perhaps, but that doesn’t mean we shouldn’t come up with a proper name for it. “The Manzke Burger” sounds pretty good, but so do “The Big Manzke” and “The Repuburger.” Either way, people are going to be talking about this burger for quite a while.