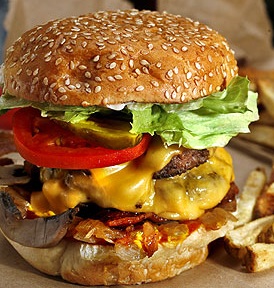 For those keeping score in what seems to be the growing rivalry between SoCal institution In-N-Out Burger and east coast import Five Guys Burgers and Fries, the stakes have gone up over the last month. With locations already established in outlying Carson and Northridge, Five Guys recently opened a branch in the Westfield Culver City mall and just announced plans for two more new locations, one in Westwood and the other downtown, by the end of the summer. Meanwhile, In-N-Out opened its first store in Texas, and around the same time inexplicably approved the demolition of it’s oldest surviving store in Baldwin Park. Indeed, Five Guys seems to be taking full aim at the California market while In-N-Out has it’s focus elsewhere.

Does this mean there a changing of the burger guard here in Los Angeles? Hardly.

While Five Guys has garnered a fair share of attention for its giant selection of free toppings, we have a hard time imagining anything rivaling the supremacy of the Double-Double. As for those Cajun fries at Five Guys? In-N-Out better watch it’s back.