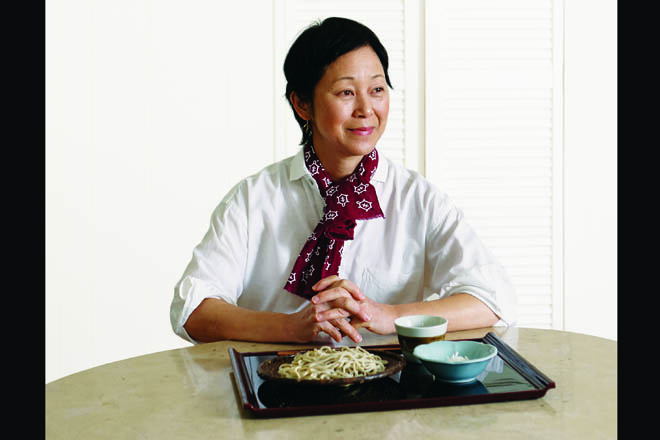 Sonoko Sakai leans over a flour-dusted table in her Highland Park kitchen. Her fat soba blade makes a rhythmic clunk-clunk as it slices through a sheet of bluish dough. The color comes from the sobako, or buckwheat flour, which has become something of an obsession and has given birth to an unexpected second career for Sakai. “I felt this was a good age to transition and focus on the stuff I really want to do,” says Sakai, 57, who has worked as a foreign-film buyer and producer and writes about Japanese cuisine for the Los Angeles Times. In 2010, memories of slurping soba with her grandmother in Kamakura sent Sakai back to Japan, where she spent several months at the side of soba masters, learning how to properly mix and cut the hearty noodles.

Now something of a soba master herself, Sakai has channeled her energies into much more than noodle making. In 2011, she founded the organization Common Grains, which is dedicated to promoting Japanese food and culture, with a special emphasis on rice and other grains. In cooperation with grant-funded Japanese agricultural groups, Common Grains has organized soba pop-ups, cooking classes, onigiri (rice ball) competitions, and speaker panels throughout Los Angeles and as far away as Paris and Hawaii. In February, Sakai was invited to Google’s headquarters to oversee a Japanese dinner for 800 employees.

“I was underwhelmed with the buckwheat flour that was on the market,” says Sakai, so she turned to Anson Mills founder Glenn Roberts. “Sonoko called me to ask questions about sobako,” says Roberts. “But when I found out how passionate she was and how much she knew, the tables turned very quickly.” Sakai now advises Anson Mills on its line of refined buckwheat blends.

In exchange, Roberts is donating seeds and equipment to Sakai for her biggest project yet: 56 acres of heritage grains, which—in partnership with Kenter Canyon Farms, Maggie’s Farm, and the L.A. Bread Bakers Association—she planted last fall around Hollister and Agoura Hills. “The goal is to start a kind of Community Grains for Southern California,” she says. Though the initial focus will be wholesale, “we hope to have a booth secured at the Santa Monica Farmers’ Market for whenever we start harvesting,” which should be in June. Until then, for Sakai it’s all about education. “I’m just trying to get people to think about grains.”