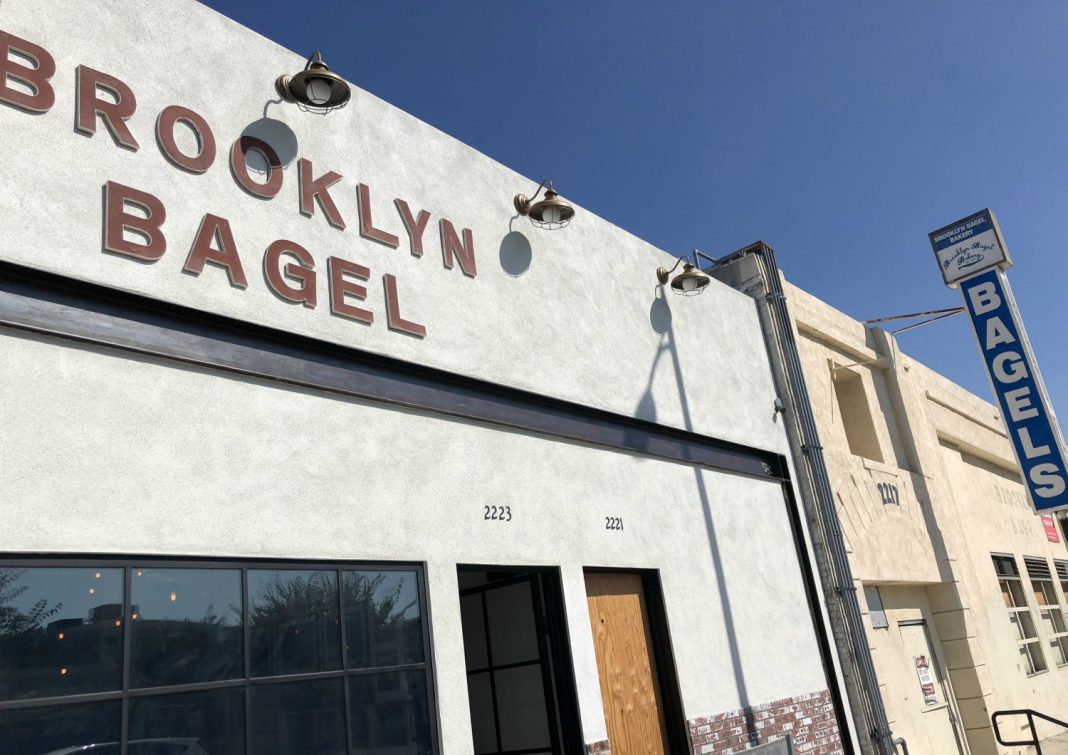 Since early summer 2015, when Brooklyn Bagel Bakery shut down its retail operation, my family has been in somewhat of an ongoing crisis. It’s not a predicament without remedy, thankfully. We can head west to the Bagel Broker, Original Brooklyn Water Bagel Co., and the Nosh of Beverly Hills, or track down goods from one of the new-wave bagel crafters who pop up around Silver Lake and Highland Park.

But when Brooklyn Bagel resumes retail sales on Beverly Boulevard near Alvarado this Friday, November 9, the general area’s bagel situation will finally feel righted again. And all those debates about bagels in L.A., and bagels in L.A. versus bagels New York, can resume and rage on indefinitely.

Brooklyn Bagel shut down when a wall collapsed in the approximately 100-year-old building on Memorial Day 2015. Its then-relatively new owner, Vanik Elchibegian, transferred wholesale operations to a commercial baking facility in Montebello, where he also runs two other companies, Breads Los Angeles and Oliver’s Artisan Breads.

The neighborhood just west of downtown wasn’t called Historic Filipinotown back in 1965 when Seymour Friedman moved his growing enterprise to Beverly Boulevard after he began rolling, boiling, baking, and selling bagels out of a West Adams spot 12 years prior. His father, Louis, had been one of the founders of the New York Beigel Bakers Union in the 1920s. Elchibegian purchased the business from Richard, Seymour’s son, in January 2015.

Now in the new retail space located in a building next door to the still-closed former Brooklyn Bagel Bakery HQ, Elchibegian has upgraded the customer experience while maintaining historical continuity and honoring the Friedmans’ legacy. He relocated the former owners’ treasure trove of beloved Dodgers images and family photographs, and he added images of the cracked beam from the bow-and-truss building that caused the wall collapse and the business’s subsequent closure.

More conspicuous is the scratched and aged hand-painted Brooklyn Bagel menu board that hangs behind the bagel case, although it functions more as an art piece and cultural document rather than menu with accurate pricing. (Bagels now cost $1.45 each, not a quarter as the first layer of the sign indicates.)

Fortunately, the wholesale component meant the city hasn’t been without Brooklyn Bagels during the three-plus years the Beverly Boulevard outpost has been out of commission. Delis including Canter’s, Factor’s, and Nate’n Al are still loyal buyers—one of the many ways Elchibegian has maintained Brooklyn Bagel Bakery’s place in the local food ecosystem. Even though Elchibegian notes that bagel making “is not similar in production at all” to other baked goods, when it comes to “taking orders, distribution… there’s a lot of similarity in the wholesale business.” (He bought the company in part because Breads Los Angeles was Brooklyn Bagel Bakery’s largest wholesale client, and he and Richard Friedman became friends over the years.)

While the product is deeply familiar to longtime fans, the shop-within-a-wholesale-bakery vibe won’t be revived, at least for now, Elchibegian says, even if the signature blade sign is still attached to the shuttered old building. Instead, the walk-in bagel shop with its dedicated on-site bakery has distinct advantages.

“As one of the baskets has been emptied, you’re going to have a fresh one go in. We’re going to be baking 24 at a time,” he notes. There will be “more bakes during the day, which keeps the freshness and quality,” he says. Varieties of three-ounce bagels will keep skewing classic, with some additional flavors, but nothing too crazy. (“Banana walnut? Why did we even have that?” Elchibegian wonders.) Wholesale baking and orders, however, will continue in Montebello as it has for the past few years.

As for what inspires Elchibegian to be a steward of sorts for this L.A. legacy brand, it’s “making something authentic and simple—that’s what makes me happy.” In a world full of industry shortcuts, Brooklyn Bagel still stands out. Elchibegian says that because of “the nature of our process here, you can’t become a big wholesaler” compared to other local companies.

Plus, Elchibegian adds, “I love the community.” For the less patient among us, Brooklyn Bagel Bakery is the type of place where you can walk in and quickly grab bagels for a crowd, which is something the current craft bagel renaissance doesn’t exactly accommodate. As for next-gen, retro-inspired newcomers with an artisanal baking bent and much lower output, such as Belle’s Bagels, Maury’s, and Yeastie Boys (which he clarifies is “more of a sandwich thing”), Elchibegian only sees an upside. “I think it’s awesome.”

“The better and more the bagels, the happier the population,” he says, laughing.