ON any given day at Bub and Grandma’s, owner Andy Kadin can be found clearing tables, running slices of key lime pie to guests, or chatting with customers.

In 2015, Kadin pivoted from his career as a writer to open a tiny sandwich shop. The only problem was, Kadin couldn’t find the kind of submarine-sandwich bread he grew up eating in Italian delis in New Jersey. So with no prior culinary experience, Kadin took matters into his own hands and began baking it himself. He perfected crusty loaves of sourdough and squares of ciabatta that were soon discovered by the owner of Dune in nearby Atwater Village, who began making beet sandwiches with them.

The wholesale business rapidly grew, and Bub and Grandma’s became one of the most beloved bread purveyors in the city, selling to 150 of Los Angeles’s most prominent restaurants.

Seven years later, Kadin reigns over a far bigger version of his dream, serving plates of brisket sandwiches made with the bread that launched the business. He refers to it as the “Bub Sub,” which pastry chef Christopher Lier spent at least six months developing.

“It was always in our minds that eventually we were gonna have a sandwich shop and need pastries there,” says Lier, who worked as pastry chef for Osteria and Pizzeria Mozza. Lier’s pastries—including a tender-to-the-bite croissant made with spelt, morning buns, and seasonally fruity,  freshly fried doughnuts—are a destination all their own.

Chef Zach Jarrett heads the kitchen at Bub and Grandma’s, which currently serves breakfast and lunch, both centered on the bread—that is, egg sandwiches in the morning and an array of salads and sandwiches around midday.

Kadin says he plans to open for dinner service at some point, with live entertainment and libations. “We’re gonna do jazz with beer and wine,” he says hopefully.

These, of course, are just dreams for now. But so far, Kadin’s had pretty good luck with those. 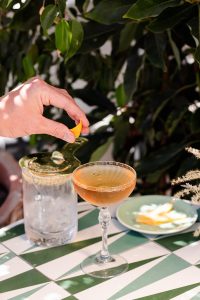 Butcher’s Daughter. The new location of this plant-based empire dazzles. Cocktails are the star along with veggie versions of carnivore food like carrot “lox,” eggplant “oysters,” and cauliflower “strip steak.” 8755 Melrose Ave., thebutchersdaughter.com.

Caviar Kaspia. This offshoot of the Parisian caviar maison offers all the same glamour with a touch of L.A. ease. This means Dungeness crab crostini topped with caviar, and California chopped salad with green goddess caviar dressing. 8475 Melrose Pl., caviarkaspiala.com.