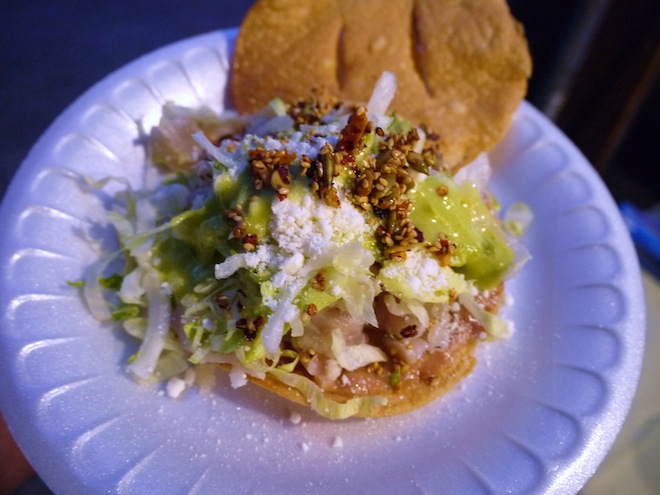 In the summer of 2009, the Hollenbeck Police Department finally closed down Breed Street, the 35+ vendor Boyle Heights institution. It existed for decades with about a half-dozen vendors, before flooding the Bank of America parking lot with dozens of stalls and stops. The two warring queens of the weekend gatherings were Antojitos Carmen and Nina’s Food, both known for their authentic Mexico City style stands, and seed salsas.

Carmen eventually opened a popular, critically acclaimed and financially successful restaurant, but closed it several months ago to move to Iowa to go into business with her daughter (who was doing very well with a catering business there). They plan to open a restaurant there, so the next time you find yourself in Iowa, pambazos (torta fried in chile sauce) are a possibility.

Nina was chased off too many times by the authorites, and went through a financially difficult time—she lost her house while in the hospital due to health problems, and then as far as I could tell, she’d disappeared.

Two weeks ago, I swung by Breed and Caesar Chavez for maybe the 50th time in the last year and saw the blurry white tether of lights going up just a half block south across from the Congregation Talmud Torah of Los Angeles. Nina is back!
While she got situated, I headed down to 1st and Breed where the two sister trucks from the Torrez family have held steady, serving quesadillas, huaraches, gorditas, and other Mexico City classics.

It will never be the same in Boyle Heights, but for now, there’s more than enough for a tasty tour down the Breed Street of my memories.