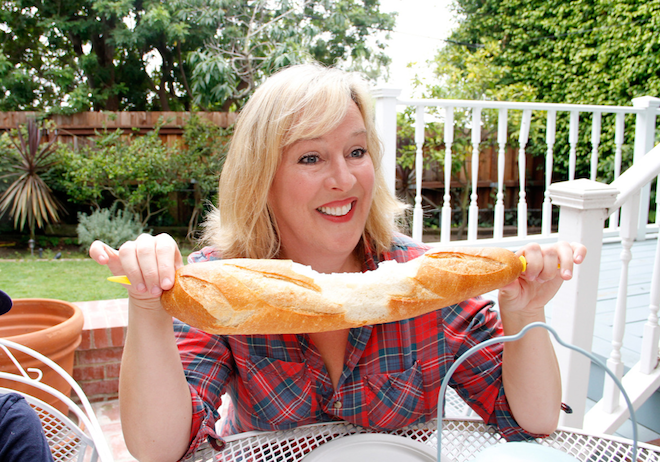 Sometimes, a baguette isn’t just a loaf of bread. In the tumblr Baguette-Me-Nots, famous funny faces from both coasts are captured, mid-baguette, in scenes meant to mimic real life or fantasy.

In one image, SNL-alum Melanie Hutsell is caught eating a baguette-corn on the cob. Lauren Lapkus, a recurring cast member on Netflix’s Orange is the New Black, munches on a baguette-banana while sitting casually in a park. Upright Citizens Brigade regular Mary Holland whistles with her baguette bird while dressed in a Snow White costume. Kristin Chenoweth, the soprano and Glee favorite, brushes her teeth with a baguette-toothbrush. It’s situational humor, parody and a bit of hyperbole, with funny people and—the best part?—crusty baguettes!

The blog is produced by Tim Bierbaum and John Milhiser, who was recently announced as the newest castmember on the upcoming season of Saturday Night Live. Though Milhiser doesn’t specialize in food-related humor, we appreciate his bread-winning efforts.

Here, too, a few other food and L.A.-related tumblrs we love.

❶ Food is the New Rock: Hosts Zach Brooks (Midtown Lunch) and Chuck P (KCRW) have combined two of pop cultures’ biggest influences—music and food—into one uproarious podcast. They alternate between chatting with chefs about music and musicians about food. (Anthony Bourdain wonders why he didn’t think of this first.) On their tumblr-blog-website, they capture the process, offer sneak previews, and insert insightful commentary on news as it relates to food in L.A. and beyond. Recently, they recorded a session with legendary Chicago-based chef Grant Achatz who tells them, among other stories, that he hopes to cook for Axl Rose one day. Take a look and have a listen.

❸ My Los Angeles Food Community: The clean-lines of this tumblr are relaxing, and conducive to the learning you’re about to do when you click on any of the square images. With simple links attached to each image, the curious food consumer can learn the origins of some of L.A.’s best food products. Cookbooks, private dinners, special events, pickles, preserves, and pizza are all covered.