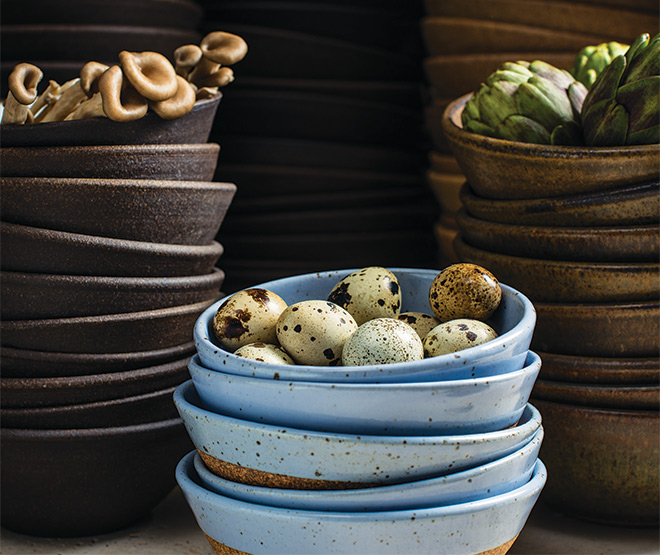 Order “The Bowl” at Axe in Venice and a virtuous repast of brown rice or quinoa, vegetables, and an optional protein arrives, served in a made-in-L.A. dish that underscores the restaurant’s modern California cooking and aesthetic. The earthy yet refined piece—glazed dark green inside and left raw outside—is from Irving Place Studio, a two-year-old tableware company with deep roots in the local design scene. Cofounded by renowned ceramic artist Dora De Larios, her daughter Sabrina Judge, and Judge’s husband, Aaron Glascock, the Mid City operation’s dishes recall those of Heath Ceramics—also used at Axe—but with more hand-hewn character.

De Larios, now 80, studied with ceramists Otto and Vivika Heino, and she has earned an international reputation for her functional objects, sculptures, and architectural installations that depict animals and goddesses. Among De Larios’s early projects: producing dishes for the Carter White House and leading the design of a massive mural at Disney World. The new tabletop line includes cereal, salad, and serving bowls, dinner plates, vases, mortars and pestles, and lidded jars. “I wanted to open the door to my mom’s work for a different group of people,” Judge says. “These are simple, elegant forms for everyday use.” Mother, daughter, and son-in-law collaborate on the shapes, but De Larios formulates the glazes—white, periwinkle, forest, and moss so far—and Judge oversees the glazing and firing.

In addition to Axe, the dishes are featured in The A.O.C. Cookbook, a collection of recipes by chef Suzanne Goin, who says she chose the company’s porcelain bowls “because they strike the perfect balance between being beautiful and special, but also feel rustic, handmade, and natural.” The cuisine of one of the city’s most celebrated chefs calls for nothing less.

Open Wide: Where to Get it