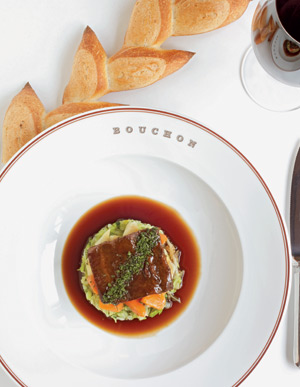 Thank God Bouchon finally opened. The anticipation was becoming too much to bear. For a moment in late summer, the name “Thomas Keller” seemed to be on the lips of half the people I knew. More than appealing to our appetites, news of the restaurant catered to our collective ego—surely Keller’s arrival was further proof that Los Angeles is a diner’s city. In a place accustomed to marquee names, this one was big.

Things were different the first time Keller manned a stove in L.A. in the early 1990s. Who even knew he was here? On the rebound from Rakel, the New York restaurant that had failed at the price point and level of ambition Keller had envisioned, he wound up working at Checkers Hotel downtown back when the area cleared out at sunset and “revitalization” seemed like a civic booster’s fantasy.

Licking his wounds, Keller remained at the post for 15 months until, on a day trip, he found himself at a discreet stone-walled restaurant in Napa Valley’s Yountville. He liked the small garden. He liked the restaurant’s sense of heritage, too. Though the building had served as a saloon and a brothel since being built in the 1800s, its stint as a French laundry is what gave the restaurant its name. Keller bought the place and began fashioning a Gallic style remarkable for being as committed to execution as it was to inspiration. The locale remained essentially the same; he even stuck with a prix fixe menu, something the previous owners had instituted. But along the way he transformed the roadside structure into America’s most celebrated restaurant and himself into a superstar chef.

The man became a juggernaut. Six years later Keller was opening two Bouchons (the word means “cork” and is the name of a modest Lyon neighborhood spot), the first in Yountville, the second in Las Vegas. Together with signaling his intent to be more than just a one-note genius, the restaurants proved that he could compress his Kellerian focus into brasserie cooking, a style that usually aims for lusty flavors served in a boisterous setting rather than pointillist precision delivered under a High Church pall. He followed the 2004 opening of Per Se, Manhattan’s answer to the French Laundry, with another Latin-named, French-inspired restaurant, Ad Hoc, in Yountville. Pro Tem may well be in the works. Apparently the bucolic Napa Valley town, with its oak-studded hillsides and pioneer cemetery, is where prototypes are established; giant urban developments are where they get rolled out.

Bouchon sits beside the Montage Hotel in Beverly Hills. The two occupy separate wings of a behemoth that, with tiled cupolas, dark beams, and arched walkways, manages to fit Spanish, Tuscan, and Southern Californian allusions into one massive block-size form. The look of the complex doesn’t go beyond upscale generic. On the other hand, the dining room of Bouchon—up a flight of stairs and down a long corridor—is completely assured. High ceilings, a curved zinc counter, globe light fixtures, and cane chairs recall those Parisian institutions where lithographed menus with lilac lettering are passed from hand to hand. The first time I walked in, I felt transported. Platters of seafood and oysters were being whisked about by waiters outfitted in long white aprons and black waistcoats, while the sommelier was poised over a table, discussing the choice of vintages. I could have been in Paris were it not for the man screaming into his cell, “I’m in Bouchon, babe—in Beverly Hills.”

The brasserie cooking that is the muse for Bouchon is like those wonderfully confident people who say exactly what’s on their mind and never worry about being too direct. Unlike haute gastronomy, which can be tortured and overthought, everything about this food—as sharp and functional as bacon drippings deglazed with vinegar to make the dressing for a frisée aux lardons salad—communicates that eating is about uncomplicated pleasure. The thing about Keller’s rendition is that he keeps the necessary bluntness but heightens the effect with finesse. Rather than creating a mishmash of brasserie rituals and haute techniques, Keller deploys an exactitude associated with the finest restaurants to amplify the fundamental satisfactions of brasserie food. Even minor dishes bear the mark of excellence. In Keller’s hands, macaroni au gratin becomes a confabulation of luxurious sauce and pasta crowned with browned bread crumbs and cheese. Quiche, the word alone capable of inducing a yawn, is so supremely realized—the crust buttery, the custard evanescent, the spinach filling uniformly distributed—that it may be one of the best appetizers I’ve ever had.

Several of the fish items show the same level of detail. In the trout with almonds, the slivers are freshly toasted and the haricots verts crisp, while the sauce sputters as though just tipped from a hot pan. Still, it is among the meats where one can detect Keller’s singular touch. The key element of the confit de canard, a duck leg poached in duck fat, is the skin, a subtle distillation of salting, slow cooking, and patient watchfulness. The short ribs are not some demi-glacé-bolstered syrup, as in so many restaurant versions, but instead carry the trace of a fabulous domestic braising broth. The boudin noir, a plump blood sausage, arrives with sensational potato puree (silky but short of rich) and caramelized apple quarters. The flavors lock into one another—with every bite you get the sweetness of the apple, the earthiness of the sausage, the airiness of the potato—and are brightened by the acidity lent by a squirt of lemon. The dish seems almost nonchalant, but every element has been considered.

My criticisms of Bouchon revolve around what seems to be a certain nervousness—a corporate nervousness—that the restaurant should be deemed anything but elegant. At the bar, computer screens are awkwardly tucked away in drawers, their visibility apparently considered a tacky reminder of commerce. In the dining room, a crusty loaf is placed on the paper tablecloth, but for the remainder of the evening busboys are furiously scraping up the debris as if crumbs on a table are déclassé.

Enough of the savory dishes share an overly polite primness to suggest that Bouchon might be conflicted about what kind of restaurant it is trying to be. The dishes aren’t shoddily prepared (an impossibility in a tightly run Keller kitchen), but they seem to balk at demonstrativeness, which in culinary terms means not emphasizing the very thing that would make them great. There’s no detectable saffron in the moules au safran; instead we merely have mollusks swimming in a wan, tepid broth. With hardly any parsley in the beurre maître d’hôtel, the steak frites have nothing but a greasy topping. I don’t know what those yellow pellets are that they put on the leeks mimosa, but they’re not the chopped hard-boiled eggs the dish requires. The inhibitions reach a high point with the so-called roasted leg of lamb. The sliced cylinder of meat may well come from a leg of lamb, but not the cooked whole leg of lamb that the term gigot d’agneau implies. Seared on all sides it can’t possibly be, so you never get the glory of oven-roasted, crackling skin. Sitting on a dry rectangle of pommes boulangères, a potato dish whose soupy quality is derived from the bakers’ oven in which it was simmered, this is the safest, tidiest, most portion-controlled leg of lamb you may ever have.

Desserts certainly seem to have been drawn up with the no-risk factor in mind. A cork-shaped brownie plays off one of the meanings of the word bouchon. But so what? It’s still a brownie. The pot de crème is lush—satisfying for being so unadorned—but with the île flottante we’re back to reticence. Traditionally these egg white clouds are generously shaped using a large ladle; here they’re thin, molded disks. A couple of bites, and you’re done. Lacking the slightest hint of creativity, the sweet offerings leave the impression that the main concern is to present desserts that can be executed any season of the year. The iconoclastic wine list manages to escape this specter of home office control by combining an interesting carafe selection with a reserve list and glorious pours, such as Turley Old Vines Zin, by the glass.

That Bouchon’s missteps are so jarring points to the standard of authenticity that Keller has set. His is a case of falling hard for France. He was working as a young cook at a private club in Narragansett, Rhode Island, when its chef, Roland Henin, lent him a copy of Fernand Point’s Ma Gastronomie. Keller would read the book in his apartment utterly engrossed. He’d understood the importance of technique before but had never been exposed to such, well, context. At La Pyramide, the legendary restaurant south of Lyon, Point liberated French cooking from the courtly associations it had amassed and reenergized it with principles that were proudly regional. For Keller, the pages of that book amounted to a revelation. Cooking based on tradition, cohesive vision, and the power of understatement—such are the hallmarks of Keller’s technique, and whichever of his ventures you eat at, you recognize these shared characteristics. Today he occupies a unique space in the restaurant world. No American chef has more internalized the values of France, and no chef is more capable of transforming a development into a destination. That’s a fascinating juncture, for hidden somewhere in there lurk some of the tensions of the modern restaurant-—between métier and money, lyricism and business, between the exigencies of practicing a craft and the demands of representing a brand.