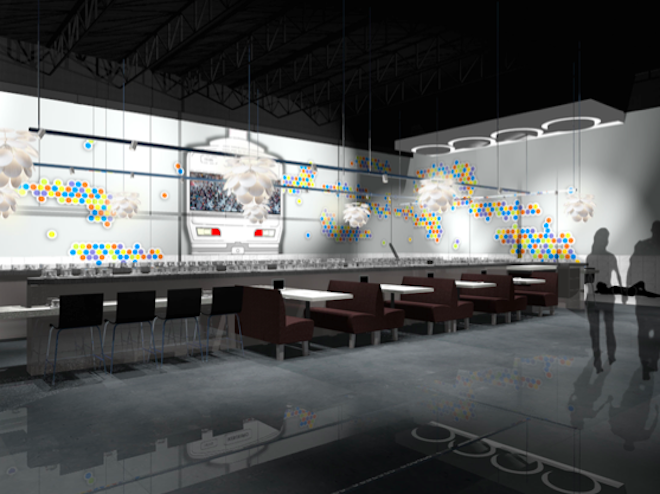 Blue C Sushi, a kaiten or conveyor belt sushi concept out of Seattle, Wash., is coming down to L.A. this August. A new location of Blue C is taking over the vacant space between Le Cordon Bleu and Veggie Grill at The Dome in Hollywood, adjacent to The Arclight Cinema on Sunset Blvd. Former corporate chef for Iron Chef Morimoto, Jeffrey Lunak, is working on the menu.

The space is currently under construction, but the architects have graciously allowed us to publish a rendering of their plans. Different from their Seattle-based locations, the first L.A. branch of Blue C will feature dream-inspired design elements. A sleeping figure dreaming of sushi is central to the design, which incorporates a three-dimentional oncoming Tokyo-style subway train behind the conveyor belt bar. The train’s windshield is a massive video screen where these dreams of sushi will play out for all to see. Will patrons skip the real show to watch these dreams? We can only wonder: What Would Jiro Do?